Washing Off The Mud They Keep Throwing At Poland 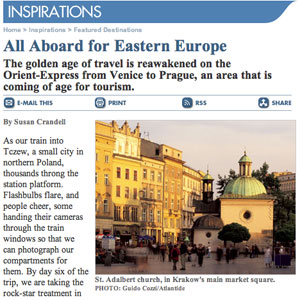 "Don’t tell a lie – no one will believe it. Tell a big lie and everyone will believe you." This is the cynical statement attributed to Dr. Jozef Goebbels, the man Adolf Hitler named to head the German Ministry for Propaganda in World War II. Goebbels, Hitler and most of the Nazis are all dead. But a lot of the big lies about the Holocaust are still around and new ones always seem to get invented.

To the embarrassment of its editors, one of these falsehoods found its way onto the pages of the February 2008 edition of the prestigious magazine, Town & Country, in an article about travel in Eastern Europe aboard the Orient Express.

As so often happens when the Holocaust liars pick a target, they put Poland on the receiving end once again.  Disregarding the fact Poland was the first to fight the Germans and fought them longer than anyone else, they accused the whole city of Krakow – the city of Pope John Paul II – of cooperating with the Nazi occupiers to avoid being destroyed the way Warsaw was.

To the credit of Town & Country, its editors recognized the injustice of such an outrageous charge and took immediate action after the Holocaust Documentation Committee of the Polish American Congress questioned them about the source of the malicious allegation.

With deep regrets and a promise to print a formal apology in the forthcoming  May issue of the magazine, they advised the Congress  that  the writer responsible for the travel story was given this statement by some unidentified tour guide.  She took it at face value and never bothered to verify it and neither did Town & Country.

“It just shows that if they keep throwing enough mud at Poland, they know some of it is bound to stick.   In this case, with an unsuspecting travel reporter we hope has learned something about the way the history  of Poland is continually distorted,” said Frank Milewski of the PAC’s  Holocaust Documentation Committee.

Town & Country told the Congress it had received numerous complaints about the slur from the Polish American community and will publish excerpts from them in the next issue along with its apology.

The Holocaust Studies Committee of the Kosciuszko Foundation added some telling points in its own complaint.  “The Nazis hated Poland too much to want to collaborate with it and they killed too many Poles to make cooperation unlikely.” its chairman, John Gmerek wrote.  “To paint the wartime citizens of  Krakow as persons who cooperated with the Nazi occupiers slanders those citizens and distorts historical facts.”

Ed Wiater, a columnist with Buffalo’s Am-Pol Eagle, was the first to bring the outlandish accusation to everyone’s attention.