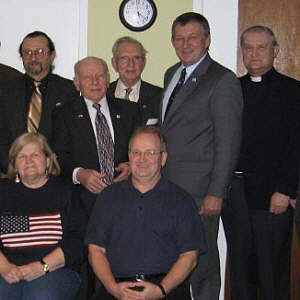 Polish American voters in Nassau and Suffolk intend to become a visible part of the political process according to Richard Brzozowski, president of the newly-established Long Island Chapter of the Polish American Congress.

Shown here are the chapter’s founding members as they met in the Polish Club of Hempstead to map their 2008 plan of political action. Voter registration will be one of their main priorities.

Seated (from left) are: Bozenna Urbanowicz-Gilbride, a Polish Catholic Holocaust survivor on the Speakers Bureau of the U.S. Holocaust Memorial Museum; Caroline Kowalczyk, president of the Polish Gift of Life; Wilma Wierbicki, recording secretary of the
Polish American Cultural Association of Port Washington; and Wlodzimierz Mikucki of the Polish Friends of Copiague.