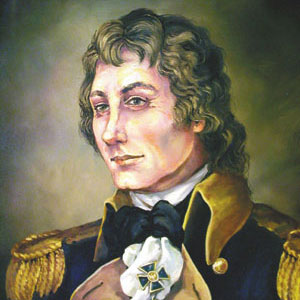 A Luncheon will follow the ceremony at the Holiday Inn Hotel Ballroom 4th & Arch Street in Historic Philadelphia
For additional information or luncheon reservations call the: Polish American Congress (215) 739-3408 or the Polish American Cultural Center Monday through Friday between 9 A.M. and 5 P.M. at (215) 922-1700.

In the event of inclement weather the Tribute Ceremony will take place at the Holiday Inn Hotel Ballroom, 4th and Arch Streets in historic Philadelphia.

General Thaddeus Kosciuszko 1746-1817 - Hero of America and Poland
Thaddeus Kosciuszko was born in Poland on February 4, 1746, son of Ludwik and Tekla Kosciuszko. He attended school in Lubieszow and then the Cadet Academy in Warsaw before continuing his engineering studies in Paris, France. By the time Kosciuszko arrived in America from Poland in 1776, he was a skilled engineer who came to offer his services to the American colonies in their struggle for independence. On October 18, 1776 Kosciuszko was commissioned as Colonel of Engineers by the Continental Congress and began his outstanding service of fortifying battle sites, many of which became turning points in America's fight for independence against the British.

Shortly after arriving in Philadelphia in 1776, Kosciuszko read the Declaration of Independence and was moved to tears because he discovered in this single, concise document everything in which he truly believed. When he discovered that Thomas Jefferson was responsible for drafting the Declaration, he felt compelled to meet him. A few months later, while moving south with the Continental Army, Kosciuszko stopped in Virginia to meet with Jefferson. After a very warm reception, the two men spent the day comparing philosophies and eventually became the best of friends.

In the early days of the war, Kosciuszko helped to fortify the Philadelphia waterfront at Fort Mercer. Shortly after, he was transferred to New York, where he helped with fortifications along the Hudson and planned the defense for Saratoga. The Battle of Saratoga became known as one of military history's most famous struggles for independence and proved to be a turning point in the war.

In 1778, Kosciuszko was made chief engineer of West Point, New York. This fortification became known as the American Gibraltar because it was unable to be penetrated by the British Army. Eventually West Point became a military academy.

In 1783, Kosciuszko was appointed Brigadier General and was awarded the Cincinnati Order Medal by General George Washington, Commander-in-Chief of the Continental Army. Washington also presented Kosciuszko with two pistols and a sword as gifts for his outstanding service to America.

After the colonies won their independence, Kosciuszko returned to Poland in 1784 to help his own country win independence from the surrounding European powers. Kosciuszko was the national hero of the 1794 insurrection. After the successful battle of Raclawice on April 4, 1794, first Warsaw and then Wilno were liberated from enemy occupation. Kosciuszko was wounded in the failed revolt and taken prisoner by the Russians. Upon his release from prison, he returned to America on August 18, 1797, which he considered his "second home." He received a hero's welcome when he reached the Philadelphia waterfront along the Delaware River. Afterward, he secured a residence at 3rd and Pine Streets, which is now the Kosciuszko House, a national memorial to this hero of the American Revolution.

Kosciuszko was admired by general and foot soldier alike, both for his technical knowledge and for his sympathetic understanding and generosity. Jefferson wrote of Kosciuszko, "He is as pure a son of liberty as I have ever known." Tragically, Kosciuszko, a devoted champion of the poor and oppressed, never witnessed the arrival of freedom in his homeland, Poland.

Kosciuszko was a firm believer of equality and requested, before leaving the United States for the second time, that the money from his estate be used to buy freedom for slaves, help to educate them and provide them with enough land to support themselves.

Kosciuszko spent the last years of his life in Switzerland, where on October 15, 1817 he died at the age of 72. He is buried in Wawel Castle, in Krakow, Poland, among the tombs of the Polish Kings.

In 1828 a Corps of Cadets erected a monument to Kosciuszko at West Point, where his work was of vital importance to America in the Revolution.

You can learn more about General Thaddeus Kosciuszko when you visit the Kosciuszko House, Third and Pine Streets, or the Polish American Cultural Center Museum, 308 Walnut Street, both in historic Philadelphia, Pennsylvania.