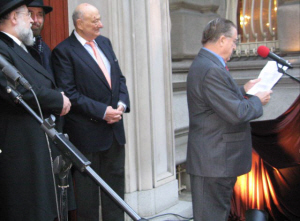 The Consulate of the Republic of Poland in New York chose Poland’s Independence Day, November 11th to pay tribute to a man honored in Poland and in Israel as “The Man Who Tried to Stop the Holocaust.”

Along with government and religious leaders from Poland and Israel, a throng of New Yorkers filled East 37th Street and watched Consul General Krzysztof Kasprzyk unveil a life-size statue of this Catholic hero of both nations.

Showing Karski sitting on a bench playing chess, the statue is situated near the entrance of the Consulate and will remain as a permanent memorial to the man Israel has made an honorary citizen and reveres as “A Righteous Among the Nations.”

During the German occupation of Poland in World War II, he was a courier for the Polish Underground (Armia Krajowa) and risked his life many times to carry information to and from the Polish Government-in-Exile.

In disguise, Karski was escorted into the Warsaw Ghetto by the legendary Irena Sendler from the clandestine organization, Zegota (The Council for Aid to Jews) and observed the inhuman German treatment of Jews inside.  He also watched the brutality the Germans inflicted on Jews being transported to the Belzec death camp.

Because of his eyewitness of the German atrocities, the Polish Government-in-Exile gave him an important assignment.  The order was for him to go see Churchill and Roosevelt and warn them both that the Germans were exterminating Jews in Poland and to do something to stop them.

He first traveled to London but the British dismissed his plea as strategically inexpedient.  He then came to the United States to give his eyewitness account to President Roosevelt but was unable to get a favorable response.

On the same trip to Washington, Karski also told his story of the German genocide of the Jews to U.S. Supreme Court Justice Felix Frankfurter who was Jewish himself.  Not only was Frankfurter unresponsive but he also questioned Karski’s integrity.

“I am unable to believe in what I have just heard, in all the things you have just told me,” Karski said Frankfurter told him.

Not only will the Karski statue be a permanent fixture on the corner of East 37th Street and Madison Avenue where the Consulate stands, the City of New York has designated that location as “Jan Karski Corner," according to Chet Szarejko who heads the Political Activities Committee of the Downstate New York Division of the Polish American Congress.

Szarejko was the liaison of the Polish American Congress with the Consulate during the preparation for the statue’s unveiling.  “New York City will place the Jan Karski Corner street sign there in a few weeks,” he announced.

Jan Karski died in 2000 at the age of 86.  It happened as he was playing chess with a Polish diplomat while sitting on a park bench.

Among the guests at the unveiling ceremony were: Polish Ambassador to the U.S. Maciej Kozlowski; Undersecretary of State at the Chancellery of the President of Poland, Ewa Junczyk-Ziomecka; Meir Lau, Chief Rabbi of Tel Aviv; Cantor Joseph Malovany; former N.Y. City Mayor Edward Koch and the Academic Choir of Poznan University.

Chet Szarejko of the Polish American Congress addresses the audience at the unveiling of the Karski statue.  Looking on are: (from left) Rabbi Meir Lau; Cantor Joseph Malovany and former Mayor of N.Y. Edward I. Koch.