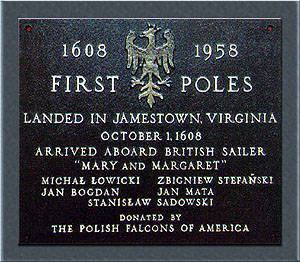 On Monday, October 1, 2007, Polish Americans will mark the 399th Anniversary of the arrival of the first Polish settlers to America at Jamestown, Virginia in 1608.

October is also the beginning of National Polish American Heritage Month. To celebrate the occasions, there will be a reception at the Polish American Cultural Center Museum, 308 Walnut Street in historic Philadelphia from 5 to 8 P.M. For more information call the Museum at (215) 922-1700. The event is free and open to the public. Everyone is invited to stop by to mark these occasions and have a good time.

A duplicate of the plaque at Jamestown, Virginia, donated by the Polish Falcons of America for the 350th Anniversary in 1958, is on display at the Polish American Cultural Center Museum during October and November, courtesy of Ben Stefanski, President of the Polish Cultural Center in Cleveland, Ohio.

As we plan for the 400th Anniversary in 2008, you can find more information about the First Polish Settlers in America and their many accomplishments at Jamestown, Virginia, on the Polish American Cultural Center Museum’s Internet site at: http://PolishAmericanCenter.org/FirstSettlers.html, or at: http://PolishPioneersInJamestown.org.

There are Many Reasons Why I Moved to Study in Poland...
An Outstanding Life Lived, Longtime Dentist Passes
Diocese of Brooklyn To Host Polish Heritage Mass in Celebration of Beatification of Stefan Cardinal Wyszynski
Anita Wlodarczyk, three-time Olympic champion, at the Pulaski Day Parade and at PSFCU
Happy Polish American Heritage Month!
A New Resolution, Important for Poland and Polish Americans Introduced by Congressman Thomas R. Suozzi (D-NY)
2nd Annual Polish Heritage Festival in Linden, NJ
Maria Michejda, M.D., D.Sc., Distinguished Research Scientist, Has Passed Away
The "Thank You for Your Service" Campaign, Organized by the Consulate General of Poland in New York
SEE MORE