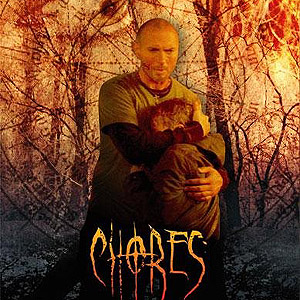 CHORES: How do you defend your family in a time of terror? A man and his family move from a large city to the town of his childhood. When eerie and horrifying events occur, the family is placed in extreme danger. The atrocities of satanic practices and the unspeakable devastation of child abuse torment the family. Only the force of good can determine their fate. Based on real-life events (featuring Luke Goss who stared in Blade II and also Hellboy II: The Golden Army). Chores is a psychological thriller that is reminiscent of the classics of this genre. Hold on to your seat, you are in for a wild ride.

Luke Goss, stars in this San Francisco Bay Area production. Goss has appeared in Hollywood films such as Blade II, The Man, and Hellboy II: The Gold Army. In addition to his accomplishments in the film world, Luke Goss also has built up credibility as a singer and actor in musicals such as What a Feeling! featuring the songs of Irene Cara. Lastly, he is to receive a CAMIE (Character in Morality in
Entertainment) Award for his work in the production of One Night with the King. As the main actor of Chores, Goss fills his role with a perfect sense of character and outstanding professionalism. The Crown Witness (Swiadek Koronny)
The Crown Witness is a powerful, true story depicting the potency of love in a unfavorable environment. A gangster testifies in trial as a state witnesses against his former Mafia contacts. He does this as a display of love for a certain woman. In addition, the gangster and and an investigative journalist cross paths. The journalist maintains an eerie secret and seeking justice meets the gangster for an interview. This highly praised and respected blockbuster with over a million viewers is sure to entertain and drew in the viewer. Lastly, MGE, Inc. is pleased to release The Crown Witness in HD DVD format.
Arthur Mrozowski www.mge.tv

2021 PSFCU Annual Meeting
Sign Petition to Save Walentyna Janta-Połczyńska House From Being Demolished
The Department for the Aging and the NYC Police Department Community Outreach. Webinar for Older Adults
Appeal to Polish American Organizations. Your Social Security Payments
Tribute Mass on the 7th Anniversary of the Canonization of St. Pope John Paul II - 04.25.2021 in NYC
The Kosciuszko Foundation 2021 Ball Postponed
11th Anniversary of the Smolensk Disaster and the 81st Anniversary of Katyn Massacre
Easter Bunny Event at the Boro Park PSFCU Branch in New York
Despite the Volatile Market, the Kosciuszko Foundation didn't Stop Helping
SEE MORE