America's and Poland's constitutions were the first 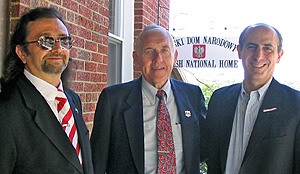 For Hispanic Americans, the big holiday in May is on the 5th, the Cinco de Mayo. For Polish Americans, it's on May 3rd, the anniversry of the 1791 Polish Constitution, the first constitution in history on the European continent.

Polish American communities throughout the United States marked that date with commemorative observances. In the City of Glen Cove on New York’s Long Island, Mayor Ralph Suozzi paid special tribute to his Polish constituents with an official proclamation presented to them at the Polish National Home of Glen Cove.

“The same spirit which guided America’s founding fathers at the Constitutional Convention of 1786 prevailed in Poland when it adopted its own constitution just five years later,” said Milewski, citing how the ideals of liberty and independence inspired the Polish heroes Pulaski and Kosciuszko to come to America and fight at the side of George Washington in the American Revolution.

Meet The Kosciuszko Foundation's Scholars and Support Education
Program "Grab and Go" meal at Krakus Senior Center in Greenpoint, NY
A New Polish Consulate has been Established in Newark, NJ
The Community That Impacts The Lives Of Polish Scholars
50th Polish American Heritage Night Hosted by the Detroit Tiger’s
2021 PSFCU Annual Meeting
Sign Petition to Save Walentyna Janta-Połczyńska House From Being Demolished
The Department for the Aging and the NYC Police Department Community Outreach. Webinar for Older Adults
Appeal to Polish American Organizations. Your Social Security Payments
SEE MORE