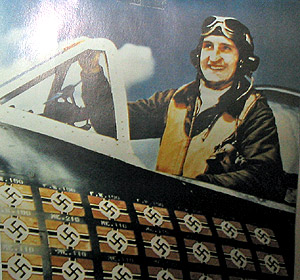 The Polish American from Oil City, Pennsylvania who gave Nazi Germany a taste of its own medicine and became a hero of both nations.

As the umbrella organization of America’s Polish ethnics, the Congress announced a wreath-laying ceremony will be conducted at Col. Gabreski’s gravesite on Saturday, May 19th, Armed Forces Day, at 11:30 a.m. Joining the Congress in the observance will be the American Polish Council of Long Island.

His remarkable record of shooting down 28 German aircraft and destroying another three on the ground was achieved within a period of less than eleven months. After going into private industry when WW II ended, Gabreski rejoined the military a few years later when the Korean War broke out. There he shot down six Soviet-built MIG-15 fighters and shared credit for the downing of another.

Gabreski took great pride in his Polish heritage. Because he spoke Polish and felt strongly “about what the Nazis had done to Poland” after they invaded and started WW II in 1939, he requested assignment to a Polish fighter unit attached to the Royal Air Force.

He then flew some two dozen missions over Europe alongside the Polish pilots prior to joining the United States 56th Fighter Group in Britain with which he amassed his amazing feats in air combat.

After he retired from the Air Force in 1967, Gabreski held an executive position with Grumman Aerospace and then was named president of the Long Island Rail Road. In tribute to him, the Suffolk County Air Force Base in Westhampton Beach was renamed the Francis S. Gabreski Airport, now a general-aviation airport.

The Polish American Congress honored “Gabby” at a special banquet in Brooklyn, N.Y. in 1998. A year later, the Congress celebrated his 80th birthday at its annual Christmas party, the traditional Polish “Oplatek.”

He was brought close to tears when the gathered children of the Maria Konopnicka Supplementary School sang their “Happy Birthday” and the traditional Polish “Sto Lat” to him. Gabreski kept in close contact with the Polish American Congress until his death in 2002.

“He was a great American and a proud American but an American who never forgot his Polish roots and always remembered his Catholic origin,” said Richard Brzozowski, secretary of the Congress and chairman of the Col. Francis S. Gabreski Memorial Committee.

Sign Petition to Save Walentyna Janta-Połczyńska House From Being Demolished
The Department for the Aging and the NYC Police Department Community Outreach. Webinar for Older Adults
Appeal to Polish American Organizations. Your Social Security Payments
Tribute Mass on the 7th Anniversary of the Canonization of St. Pope John Paul II - 04.25.2021 in NYC
The Kosciuszko Foundation 2021 Ball Postponed
11th Anniversary of the Smolensk Disaster and the 81st Anniversary of Katyn Massacre
Easter Bunny Event at the Boro Park PSFCU Branch in New York
Despite the Volatile Market, the Kosciuszko Foundation didn't Stop Helping
The 40th Anniversary of St. Stanislaus Polish School in Wallington, NJ
SEE MORE