For nearly 5 years, this Polish Catholic Had a Jewish Sister 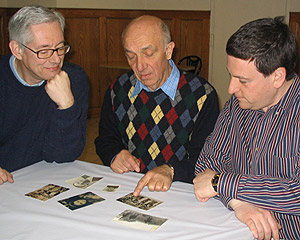 Edward Pieniak (center) tells Rabbi Jacques Cukierkorn (r.) of Kansas City, Missouri the story of the Jewish sister he had during the German occupation of Poland in World War II.

Rabbi Cukierkorn is in the process of writing a book about Polish Christians who helped Jews during the Holocaust and came to New York City to interview individuals like Pieniak and record their experiences. Co-author of the proposed book is Bill Tammeus (l.), faith columnist with the Kansas City Star.

With only boys in the family, Pieniak’s farmer parents jumped at the chance to add a girl when they were asked to take in an 8-year old Jewish girl and hide her from the Germans. They lived in a little village near Lublin, Poland known at the time as Wlasnosc.

Her physical appearance gave none of the Nazis occupying Poland any reason to believe her to be anything else but a typical little Polish girl who helped and even went to church with her mother. Pieniak was just a toddler when she came into the family but told Rabbi Cukierkorn and Mr. Tammeus how he never forgot the fond memories he always held about his “older sister.”

Sheltering or helping Jews in German-occupied Poland posed a serious danger to anyone doing it. Poland was the only country where the Nazis ordered a death penalty not only for the persons directly aiding them but even for the neighbors living nearby. Despite the grave risk, the Pieniaks’ neighbors were supportive of them and their new addition.

In recognition of the risks Christians took to help Jews, the State of Israel honors such rescuers as “Righteous” at the Yad Vashem Memorial in Jerusalem. There are more persons acknowledged as “Righteous” from Poland than from any other country.

Unfortunately, the Pieniak family has not been honored this way and apparently will never be. One of the requirements for qualifying for the “Righteous” designation is the testimony of the Jewish person who was saved verifying that the rescuer actually did it.

Soon after the war ended and the Germans left, Edward Pieniak’s “sister” was returned to her relatives and never heard from since. His subsequent attempts to locate her were unsuccessful.

Before coming to New York to gather material for his book, Rabbi Cukierkorn asked the Polish American Congress for its assistance in meeting Polish rescuers like Mr. Pieniak. The Congress also helped to arrange interviews with Michael Madejski and Wanda Lorenc of Sea Cliff, N.Y.

Mr. Madejski is honored at Yad Vashem as part of the Polish Scouting Troop Zoska. During the Warsaw Uprising of August, 1944, the Zoska scouts liberated 350 Jews from the Nazi concentration camp in the city known as Gesiowka.

Wanda Lorenc is a member of the Wos family which also is among the “Righteous” at Yad Vashem. Her parents and her brother, Paul Zenon Wos, rescued and hid twelve Jews they helped escape from the Warsaw Ghetto as the Germans were liquidating it in April, 1943.

Regardless where they live, anyone who was, or knows Polish persons involved in rescuing Jews during the Holocaust and feels their story could be of interest to Rabbi Cukierkorn and Mr. Tammeus should contact:
Holocaust Documentation Committee Polish American Congress 177 Kent Street Brooklyn, N.Y. 11222 Phone: (516) 424-4547 Contact: Frank Milewski – (718) 263-2700 – Ext. 105