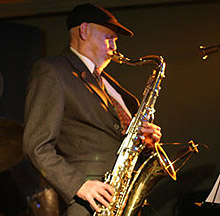 The Polish Cultural Institute, Birdland, and Blues Alley Jazz Society, with support from the Embassy of Poland in Washington, present: "BIRDS OF A FEATHER..."

THE GODFATHER OF POLISH JAZZ, JAN "BIRDMAN" WROBLEWSKI WITH HIS QUARTET,

AT BIRDLAND & INTERNATIONAL JAZZ JAM! AN ARTIST WHO DEBUTED WITH LEGENDARY KRZYSZTOF KOMEDA, REPRESENTED POLAND IN MARSHALL BROWN’S INTERNATIONAL YOUTH BAND AT THE 1958 NEWPORT JAZZ FESTIVAL, AND HAS SHAPED THE POLISH JAZZ SCENE FOR HALF A CENTURY

JAN "PTASZYN" WROBLEWSKI – a leader of the Polish jazz scene, originator of numerous unconventional projects, and animator and
promoter of jazz in Poland for half a century - can surely be regarded as the godfather of Polish jazz. Born in 1936, he’s from the generation that, in the Stalinist era, discovered jazz on clandestine radios when it was considered degenerate, immoral, and subversive. Now, well into his sixth decade of performing, he is internationally acclaimed as a maestro of the tenor and baritone saxophone and more - a bandleader, composer, arranger, jazz journalist, and conductor of jazz bands on many radio and TV programs. “Ptaszyn” has mentored, launched, promoted, or played with virtually every well-known jazz musician in Poland.

There is a nice coincidence in his appearance at Birdland, which got its name from its opening headliner in 1949, saxophonist Charlie “Bird” Parker. Sax player Wroblewski was nicknamed “Ptaszyn” by Krzysztof Komeda, a term that roughly translates as “Birdman” or “Birdie” and was inspired by his surname’s derivation from “sparrow”.

The milestone in his career was his leading of the Polish Radio Jazz Studio – without which Polish jazz would not have been the same. Directed by “Ptaszyn”, the Studio existed during the period 1968-1978 and featured all the prominent Polish jazz performers. From the 1960s to 1980s, Wroblewski also collaborated with the Flemish Radio in Brussels (BRT Orchestra) as arranger, composer and performer.

A distinguished composer and arranger in the main current of world jazz – straight-ahead jazz / mainstream – as well as in free jazz, he also specializes in writing Third Stream symphonic compositions.

The new “Ptaszyn” Wroblewski Quartet has been playing with today’s line up since 1996: Jacek Niedziela on double-base, Wojciech Niedziela on piano, Marcin Jahr on drums. Currently the quartet is on a successful tour in Poland promoting their newly released CD
Supercalifragilistic (March 2007). At 71, the godfather of Polish jazz keeps on playing, organizing and nurturing.