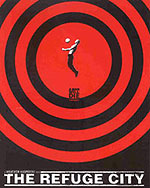 In a grand tradition launched at the world-renowned Lodz Film School in Poland by the student and diploma films of such directors as Polanski and Kieslowski, a current student – Wojciech Kasperski has already won acclaim at festivals worldwide for two of his short films. The latest, The Refuge City (Miasto ucieczki, 2006, 18 min.) was selected for the Student Short Film Competition at the 6th Tribeca Film Festival, and is being screened 5 times as part of the program ”Desperate Measures” (7 films, 104 min.).

This narrative short is an evocative study of male bonding and machismo in the context of an urban alienation from which only the soccer leagues offer refuge, yet with a constant risk of that machismo and alienation igniting a soccer riot. A brilliant
integration of dramatization and archival footage from an a tual incident in the Manchester-like industrial city of Lodz in 2004, when riot police fired into a violent post-game melee between rival fans on the university campus.

Wojciech Kasperski’s presence for Q&A at the Tribeca Film Festival as well as the screening at Galapagos are made possible by the Polish Cultural Institute in New York, and the Polish Film Institute in Warsaw