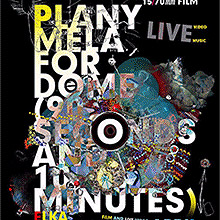 In the summer of 2006 Elka embarked on a demanding and unique project. Equipped with a custom-made portable projection system mounted on her head, she went on a three-month solo journey along the full length of Poland’s borders (over 2180 miles). Along the way, guided by a mix of intuition and pure chance, she entered the private homes of villagers as well as public spaces, offering to show her films to random audiences. Her journey encompassed the past and the present of many ethnically complex communities once vibrant along Poland’s borderlands. Fostering a zone of porousness between artist and audience, she encouraged and engaged creativity on the other side, entering into one-on-one dialogues and collecting many oral stories, recordings, objects, and friendships. The artist is currently at work on an interactive movie/book/archive resulting from the experiment.

The first embodiment of the project, PLANY MELA for dome, is an animated and abstract IMAX film (15/70 mm) / live / video hybrid with sound score and live music performed by Alan Licht. The work will be shown once only, on April 21, together with works by computer artist Heath Hanlin, photographer/video artist Carrie Mae Weems, and video artist Bill Viola, during the Syracuse International Film & Video Festival’s special program presenting works that relate image to music. Krajewska's piece was made especially for the IMAX screen and, as does Hanlin's, employs live musicians as part of the presentation.

Elka Krajewska’s work is presented by the Syracuse International Film & Video Festival with the support from NYSCA and additional help provided by the Polish Cultural Institute.