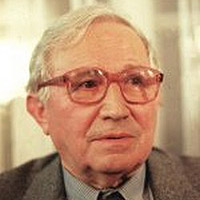 Launching the publication by Archipelago Books of New Poems by Tadeusz Rozewicz, translated by Bill Johnston

I cannot imagine what post-war Polish poetry would have looked like without the poems of Tadeusz Rozewicz. We all owe something to him... Wislawa Szymborska.

The Department of Slavic Languages, the Polish Studies Program at SIPA, and the Center for Literary Translation will host prominent
translator Bill Johnston, who will discuss his philosophy of translation and present his rendition of Tadeusz Rozewicz's "New Poems", published by Archipelago Books.

A rare chance to hear the foremost translators of Eastern European literature. Noted poet and critic Edward Hirsch will provide an introduction to the work of the prominent post-war Polish poet Tadeusz Rozewicz, and Bill Johnston will read from his new translation of Tadeusz Rozewicz's New Poems (Archipelago Books, 2007).

Mathew Sweney will read from his translations of the poems of Czech writer Ivan Blatny included in The Passerby: Selected Poems
(forthcoming from Ugly Duckling Presse).

Tadeusz Rozewicz (b. 1921) started writing poetry while fighting with the resistance against the German occupation in World War II. Rozewicz developed a unique, pared-down style that consciously avoided metaphor and sought a new, painfully clear voice in which to express the horrors of war and the fragility of human existence. Equal to Beckett in his renovation of form, Rozewicz has provided his own answer to the question whether poetry is even possible after Auschwitz, by creating a new type of restrained verse that is known as the fourth versification system in literary Polish, as in Anxiety (1947) and A Red Glove (1948).

Today a poet, playwright and novelist, Rozewicz is unanimously listed as belonging to the Pantheon of the greatest Polish poets of the 20th century, together with Czeslaw Milosz, Zbigniew Herbert, and Wislawa Szymborska, and his dramas are constantly presented by Poland’s best theatres, next to plays by Witold Gombrowicz and Slawomir Mrozek. Rozewicz continues to write and publish new work, and has been translated into many languages.

Bill Johnston is Director of the Polish Studies Center at Indiana University. His translations include Gustaw Herling's The Noonday Cemetery and Other Stories (New Directions, 2003), Stefan Zeromski’s The Faithful River (Northwestern University Press, 1999), Witold Gombrowicz's Bacacay (Archipelago Books, 2004), and Magdalena Tulli's Dreams and Stones and Moving Parts (Archipelago Books, 2004 and 2005). He has held translation fellowships from both the National Endowment for the Humanities and the National Endowment for the Arts. Johnston's translation of Dreams and Stones won the AATSEEL Translation Award in 2005.

“I got imprisoned for rock and roll”: Andrzej Stasiuk and the Literature of Periphery – A lecture by Dr. Krzysztof Gajewski Demystifying Investment in the USA: Steps for Success - Free Educational Seminar Is There Lead in New York Drinking Water? 13th "Lucky" and Very Successful Medico-Legal Seminar of Dr. Nasiek The Kosciuszko Foundation 2021 Ball Postponed 11th Anniversary of the Smolensk Disaster and the 81st Anniversary of Katyn Massacre Multifamily Building in Ridgewood, NY for Sale! Good Investment
read more