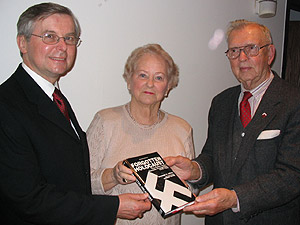 "Nowhere else is Holocaust history as distorted and misrepresented as about Poland." This disturbing observation comes from Michael Madejski (right), a Polish Catholic recognized by the State of Israel for the distinguished and honorable role he played in rescuing Jews during the Holocaust.

Shown above with him is Andrew Kaminski (left), co-chair of the Children of Polish Christian Holocaust Survivors, recently formed by the Polish American Congress for which Mr. Madejski will act as adviser. With them is Wanda Lorenc, a survivor of the Ravensbruck and Spandau concentration camps.

Because of repeated attempts by Holocaust revisionists to “blame the Polish people for anti-Jewish atrocities the Nazis and Communists committed,” Mr. Madejski presented Mr. Kaminski with a copy of Dr. Richard C. Lukas’ book, “Forgotten Holocaust: The Poles Under German Occupation 1939 – 1944” as a truthful and reliable reference source for the members of his group.

Kaminski’s father was an Auschwitz survivor. Not shown in the photo is Eva Preisler-Grabicki who heads the Children’s unit. Her father is Michael Preisler of the Polish American Congress Holocaust Documentation Committee and honorary president of the PAC’s Downstate New York Division who also survived Auschwitz.

Madejski was a boy scout at the time the Germans invaded Poland to start World War II and belonged to the Zoska scouting troop. When the Polish underground resistance Armia Krajowa launched the Warsaw Uprising in August, 1944, the Zoska scouts joined the battle against the Nazis.

During the fierce and bloody fighting which followed, Madejski and his fellow scouts managed to liberate the German concentration camp Gesiowka in the heart of Warsaw and set free some 350 Jewish prisoners held there.

In appreciation of the heroism the scouts displayed in rescuing the Jewish prisoners, Israel honored the troop at its Yad Vashem Memorial as “Righteous Gentiles.”

Wanda Lorenc also fought in the Warsaw Uprising as a member of Armia Krajowa. When later sent to a concentration camp holding Jews as well as Poles like herself, a Nazi woman SS guard caught her tossing bread to some Jewish prisoners. In a fit of rage, the SS woman knocked Mrs. Lorenc down, kicked her in the face and knocked out her teeth.

Still, she considers herself lucky despite this cruel punishment. “Many Poles got a bullet in the head for doing something like this,” she said.

“I got imprisoned for rock and roll”: Andrzej Stasiuk and the Literature of Periphery – A lecture by Dr. Krzysztof Gajewski Demystifying Investment in the USA: Steps for Success - Free Educational Seminar Is There Lead in New York Drinking Water? 13th "Lucky" and Very Successful Medico-Legal Seminar of Dr. Nasiek The Kosciuszko Foundation 2021 Ball Postponed 11th Anniversary of the Smolensk Disaster and the 81st Anniversary of Katyn Massacre Multifamily Building in Ridgewood, NY for Sale! Good Investment
read more