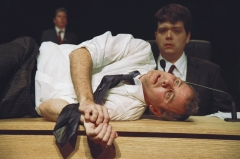 THE STRANGERER, a deliciously absurd political satire of the Bush/Kerry 2004 debate, is based on the works of Nobel Prize winner
Albert Camus. "it is funny, it is beyond brillant...it's the best piece you'll see this year about American politics, the news business or existentialism"
WBEZ Critic's Pick of the Week

Playing in March THE WEIR by Signal Theater at the Chopin Studio is nominated for Joseph Jefferson Award. It is the 2nd Jefferson Nomination this year for a Chopin Studio production after Faith Healer by Uma Theater The WEIR runs each Thurs-Sun until March 25th Reserve your tickets 773.347.1350

The Sound of Silent Film - Contemporary silent films scored by live musicians will run at Chopin Main Stage March 14 and 21 at 730pm www.acmusic.org