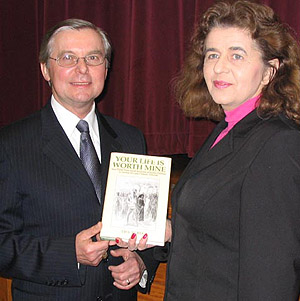 Polish historian Ewa Kurek Ph.D. (right) presents a copy of her book, "Your Life Is Worth Mine" to Andrew Kaminski, co-chair of the Children of Polish Christian Holocaust Survivors, a unit of the Polish American Congress.

Dr. Kurek's appearance at the Polish & Slavic Center in Brooklyn's Greenpoint section was part of a visit to the metropolitan New York area to promote her newest book, "Beyond Solidarity: Polish-Jewish Relations 1939-1945."

"Your Life Is Worth Mine," a tribute to Poland's Catholic nuns who sheltered and saved the lives of more than 1200 Jewish children during the German occupation, was originally published a decade ago.

Risking their own safety by defying German orders, the nuns hid the Jewish children in nearly 200 religious institutions, including schools and orphanages. Poland was the only country in all of German-occupied Europe where any aid or shelter to Jews would be punished by an automatic death sentence.

In post-war years, the Communist rulers of Soviet-dominated Poland (1945-1989) engaged in a major confrontation with the Catholic Church. They suppressed any information on the heroic wartime efforts of the nuns and the priests. Now, more than a half-century after the war, the truth is finally being revealed.

"Dr. Kurek's research into Polish-Jewish relations is an immense contribution to developing a deeper understanding of our shared experience," said Mr. Kaminski whose father survived Auschwitz.

"The Polish American Congress organized the Children of Polish Christian Holocaust Survivors with the same objective," he said.