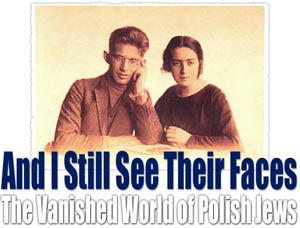 The Museum of the History of Polish Jews, North American Council and The Florence & Chafetz Hillel House at Boston University cordially invite you to a benefit honoring Sigmund A. Rolat and Wayne Zuckerman and celebrating the opening of the photographic exhibit.

Golda Tencer, Creator of the Exhibit, will attend

Proceeds to benefit
The Museum of the History of Polish Jews, North American Council and The Florence & Chafetz Hillel House at Boston University
RSVP form call 212-836-1536 or email lsherman@mhpjnac.org for benefit tickets and further information

The exhibition And I Still See Their Faces: The Vanished World of Polish Jews was created by Golda Tencer, founder and director of the Shalom Foundation in Warsaw, an initiative dedicated to preserving the Polish-Jewish heritage in Poland. This photographic exhibition documents the thriving life of Polish Jews and their everyday activities in the years before the Holocaust. Photographs and albums from that era, whose subjects had perished, were scattered throughout Poland and beyond, but were saved from obscurity by the Shalom Foundation when it issued an appeal in 1994 for photos that yielded over 7,000 prints from all over Poland and the world, from professional portraits and group photos to family snapshots. From this collection, which is still growing, was culled this extraordinarily moving panorama of a whole society, the photographs digitally enlarged, beautifully arranged, and accompanied by the eloquent commentaries of the surviving relatives and friends – or their descendants – who responded to the Shalom Foundation’s appeal, thus vividly evoking the vanished world of over three million Polish Jews.

To learn more about The Museum of the History of Polish Jews, which is being built in Warsaw, and whose North American Council is co-sponsoring this exhibition, please visit: www.Jewishmuseum.org.pl