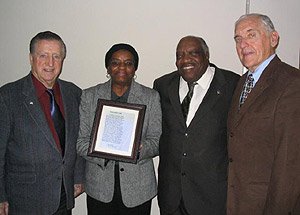 At ceremonies held at the Presbyterian Church of St. Albans, the Polish American Congress presented a reproduction of General Kosciuszko’s last will and testament to the United for Progress Democratic Club of Queens, New York.

Shown above are: (left to right) Chet Szarejko who heads the Political Activities Committee of the Downstate N.Y. Division of the Polish American Congress; Essie Lowry, president of the Progress Club who holds the copy of Kosciuszko’s will; Henry Murphy, member of the club’s board and master of ceremonies; and Frank Milewski, president of the N.Y. Congress.

Before Kosciuszko left the United States in 1798, he directed the executor of his will, Thomas Jefferson, to distribute all his property he was leaving behind for “purchasing” black slaves and “giving them liberty in my name.”

In describing Kosciuszko, Jefferson stated, “he is as pure a son of Liberty as I have ever known and of that liberty which is to go to all and not to the few or rich alone.”

The PAC’s Milewski was a guest speaker at the Black History Month commemoration. “Kosciuszko is an example of the true Polish spirit,” he said.