After a flood of protests... 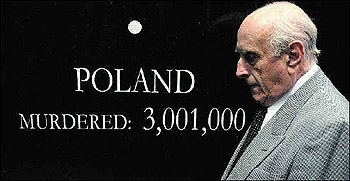 New York, N.Y. - After a flood of protests from Detroit’s Polish American community and a condemnation by the Holocaust Documentation Committee of the Polish American Congress, the Detroit Free Press agreed to remove a misleading photo displayed on its website.

The picture was taken at a local Holocaust Center and showed a Jewish Holocaust survivor standing next to an exhibit allowing only a small section of the exhibit to be seen. The section accusingly displayed the words, “Poland Murdered: 3,001,000.”

For Michael Preisler, an Auschwitz survivor who co-chairs the Holocaust Documentation Committee of the Polish American Congress, it looked like “another Holocaust fraud” leaving the impression Poland was responsible for killing three million Jews.

The misleading picture first appeared in the print edition of the Detroit Free Press in December. In response to the Polish American protests that followed its publication, the editors could do no better than to issue a perfunctory and unsatisfactory attempt at a clarification.

“A photo caption for a Sunday front-page article about former Nazi guards should have made clear that William Weiss, a Holocaust survivor, was standing in front of a three-sided panel at the Holocaust Memorial Center in Farmington Hills that was engraved with the number of people by country killed during the Holocaust,” they stated.

The whole matter might have ended at that point except for the fact the accusation in the photo was given a new life when it next appeared on the Free Press website. With the Holocaust Documentation Committee in New York adding its voice to the protests of Detroit’s Polish Americans, the newspaper pulled the photo off its website.

Whether it was done intentionally or through just plain ignorance was not the issue for Preisler. “Yes, the picture was misleading but its accusation was clear: blame Poland for the three million Jews the Germans killed,” he said.

The matter was resolved to Preisler’s satisfaction after it was brought to the attention of the public editor at the Free Press “who was able to understand the grave implications of that false indictment of Poland.”

The public editor not only acknowledged the concerns of Detroit’s Polish Americans about this matter but also stated he would give serious consideration to the recurring problem of describing World War II concentration camps as “Polish” instead of German so frequently seen in various media..