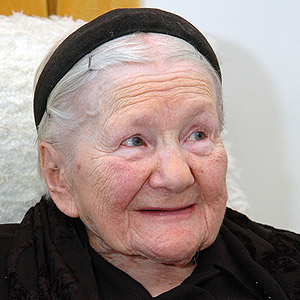 A class project by four high-school girls from Kansas has spurred a grassroots movement to nominate for a Nobel Peace Prize a woman who rescued 2,500 Jewish children from the Nazis - a move endorsed last week by the deputy prime minister of Israel, Shimon Peres. A Polish social worker, Irena Sendler, who turns 97 next month, smuggled children out of the Warsaw ghetto and refused to disclose their whereabouts even after being tortured. Gestapo officers crunched her legs in a vice and smashed her bones with hammers. Mrs. Sendler stashed the identities of the children she saved in jars and buried the jars under an apple tree. Her plan was to dig up the jars after the war and reunite the children with their families.

Mr. Peres has written a letter to President Kaczynski of Poland saying he agrees with growing Polish sentiment that Mrs. Sendler "should be duly considered for the Nobel Peace Prize."

"This brings me great joy, but on the other hand, it's a shame that my liaison officers are not alive. I would not have been able to do anything without the crew people around me," Mrs. Sendler told the Sun in a telephone interview from the nursing home where she lives in Warsaw.

Mrs. Sendler's story was buried when the Soviet Union imposed communism on Poland. And even though Mrs. Sendler was honored in 1965 by Yad Vashem as one of the righteous who saved Jews, it took four Protestant girls from Pittsburg, Kan., to teach Catholic Poland about the story.

In 1999, three Union High School ninth-graders, Megan Stewart, Elizabeth Cambers, and Jessica Shelton, and an eleventh-grader, Sabrina Coons, entered a history project after their teacher Norm Conard showed them an article about "Schindler's List," which mentioned others who rescued Jews from the Nazis. Surprised that Mrs. Sendler saved twice as many people as Schindler, the girls researched her life and wrote a play called "Life in a Jar."

"Irena Sendler changed my life. As a teacher, she made me more aware of the importance of Holocaust education and showing how one person can change the world. Through her actions, she gave our students the passion to tell her story," Mr. Conard told the Sun. A social worker in 1939 when the Germans invaded Poland, Mrs. Sendler and her friends set up soup kitchens when the Nazis ordered her agency to cut off support for impoverished Jews. When the Gestapo corralled 450,000 Jews in Warsaw into a cramped ghetto and the prisoners began starving to death, Mrs. Sendler obtained a pass to enter under the guise of preventing an epidemic of infectious diseases. Once inside, Mrs. Sendler told the Jews the Nazis were planning to murder them and convinced them to hide their children.

Mrs. Sendler used an ambulance to smuggle children out of the ghetto in burlap sacks and coffins. A barking dog on the front seat would sometimes drown out the cries of children in the back who had been separated from their parents. She received help from her friends and Zegota, the Polish Council to Aid the Jews. More children were smuggled out in garbage cans, toolboxes, and through a church on the edge of ghetto.

In October 1943, Gestapo officers arrested Mrs. Sendler and tortured her for three months before she was sentenced to be shot by firing squad. But Zegota bribed a Nazi guard who helped her escape. After the war, Irena dug up the jars and tracked down the 2,500 children to reunite them with their families. While most of the parents had been killed, many of the children found relatives scattered around Europe. The grown children, such as: Teresa Korner in Israel; Renata Zajdman in Montreal; Piotr Zysman Zettinger in Stockholm, Sweden; Irena Wojdowska in Szczecin, Poland, and Katarzyna Meloch, Michal Glowinski, and Elzbieta Ficowska of Warsaw, Poland, are living proof of the horrors of the genocide.

"If someone is drowning, you have to give them your hand. When the war started, all of Poland was drowning in a sea of blood, and those who were drowning the most were the Jews. And among the Jews, the worst off were the children. So I had to give them my hand," Mrs. Sendler told the Sun.

Not all Poles had clean hands during the war, and most were afraid to risk their lives. The Germans made it a crime to shelter Jews, and Christian Poles caught were executed. At a time when Holocaust deniers are gaining more attention, the Forum of Polish Jews has posted a petition on its Web site http://fzp.jewish.org.pl/nobel_eng.html , promoting Mrs. Sendler for the Nobel Peace Prize.

"The survivors and witnesses of the Holocaust are dying of old age. By documenting the story of human rights heroes like Irena Sendler, we can end the nonsense spread by the Iranian president that the Nazis did not murder Jews in concentration camps," Poland's undersecretary of state, Ewa Junczyk-Ziomecka, told the Sun. Mrs. Sendler seemed surprised about the Iranian president's denial of the Holocaust, replying, "That's ridiculous. He should educate himself. Either he is not intelligent or has another intention. He must be saying this on purpose because there is no way an intelligent person could not know this."