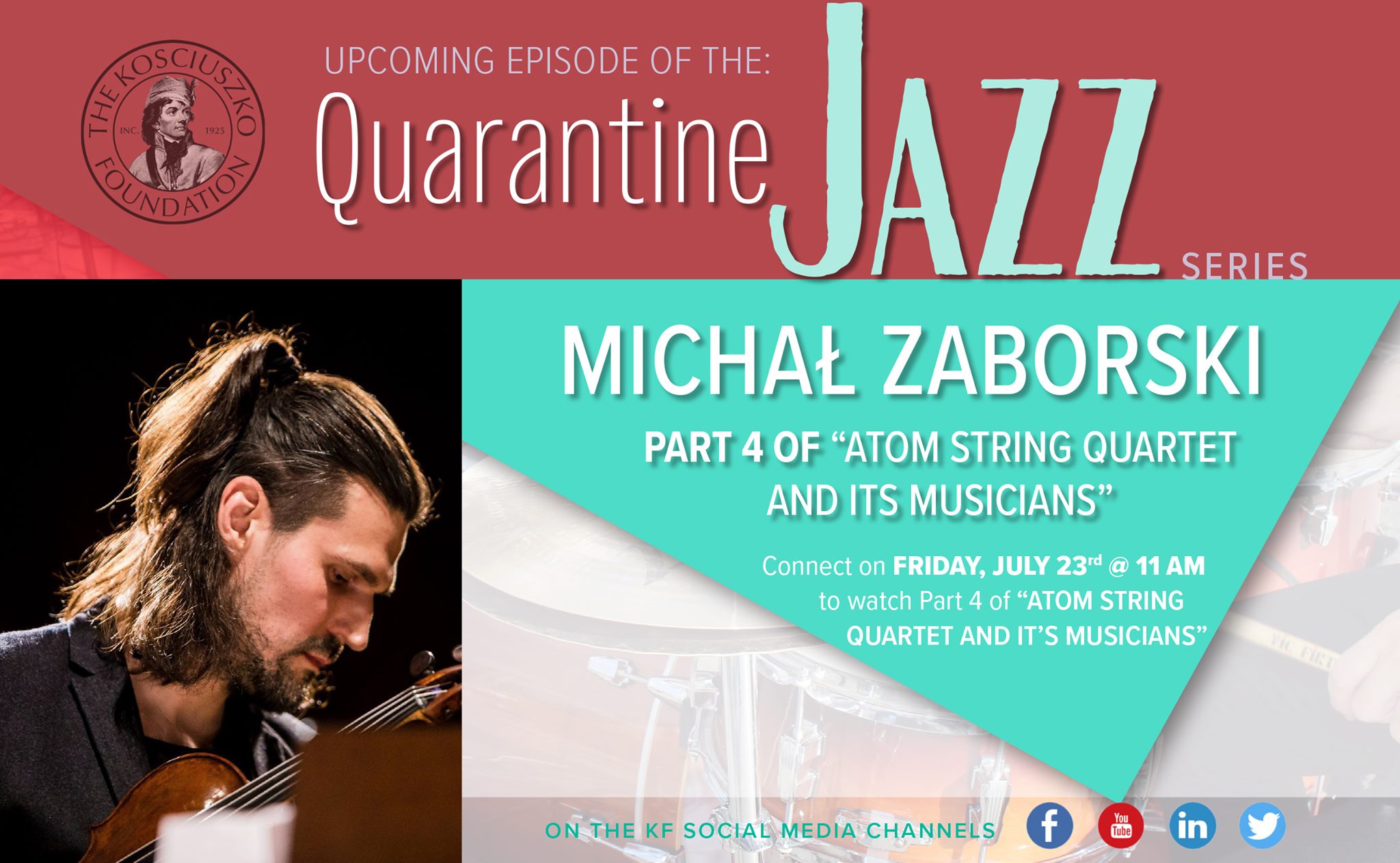 Connect with us on Friday, July 23rd at 11 AM to view the next episode in the KF Quarantine Jazz series featuring Michał Zaborski "Atom String Quartet and Its Musicians" Part IV.

Michał Zaborski graduated from the Frederic Chopin Academy of Music in Warsaw, from the viola class of Professor Ryszard Duź. He was awarded the Minister of Culture and National Heritage Scholarship “Young Poland”. He took part in various viola contests, e.g. in Poznań (Poland) in 2003, where he won 3rd prize, in Portschach (Austria) in 2003 – also 3rd prize, in Bled (Slovenia) in 2004 – 2nd prize. In 2009 with the band “The Transgress” he won the Blues Rock Jazz Warsaw Festival in the jazz band category. This band performed as support before the concert of “Medelski, Martin &Wood” trio in the Congress Hall in Warsaw.
He performed as a soloist with Lublin Philharmonic Orchestra playing Hector Berlioz “Harold in Italy”. He developed his abilities in classical and jazz music workshops in Poland and abroad, with such musicians as: Nobuko Imai, Hatto Beyerle, Stefan Kamasa, Jean Sulem, Claude Lelong, Siegfried Fuhrlinger, Simonide Braconi, Cezariusz Gadzina, Robert Majewski, Maciej Strzelczyk.
He recorded pieces of Bartłomiej Gliniak music with Krzysztof Herdzin trio to the film “NN” by Feliks Falk. He collaborated with musicians and ensembles such as: Krzysztof Jakowicz, Stefan Kamasa, Janusz Olejniczak, Krzysztof Jabłoński, Piotr Pławner, Rafał Kwiatkowski, Jakub Jakowicz, Trio Chausson, Prazak Quartet, Prima Vista String Quartet. He is a member of Sinfonia Varsovia Orchestra and Radom Chamber Orchestra, where he acts as the leader of the violas group.
Atom String Quartet is one of the most intriguing string quartets in the world, and also one of best Polish jazz bands. The group combines the capabilities of a string quartet (i.e. two violins, viola and cello) with improvisation in its broad sense. The set of instruments of a chamber music ensemble, which is most classic and firmly established in music tradition, enables the artists to search for new sound and formal achievements. It is difficult to define, in an explicit way, the music style of the group. Its music output, besides jazz, shows sources of inspiration coming from Polish folk, music of various regions of the world, and also contemporary and classical music.
The quartet was established in Warsaw in 2010
Become a sponsor of our cultural online programs. Help in delivering a weekly dose of entertainment and contribute to supporting Polish artists. Please consider donating through our website www.thekf.org. Make even a greater impact by becoming or renewing your membership.

This program is sponsored by Krystyna Piorkowska Fund.