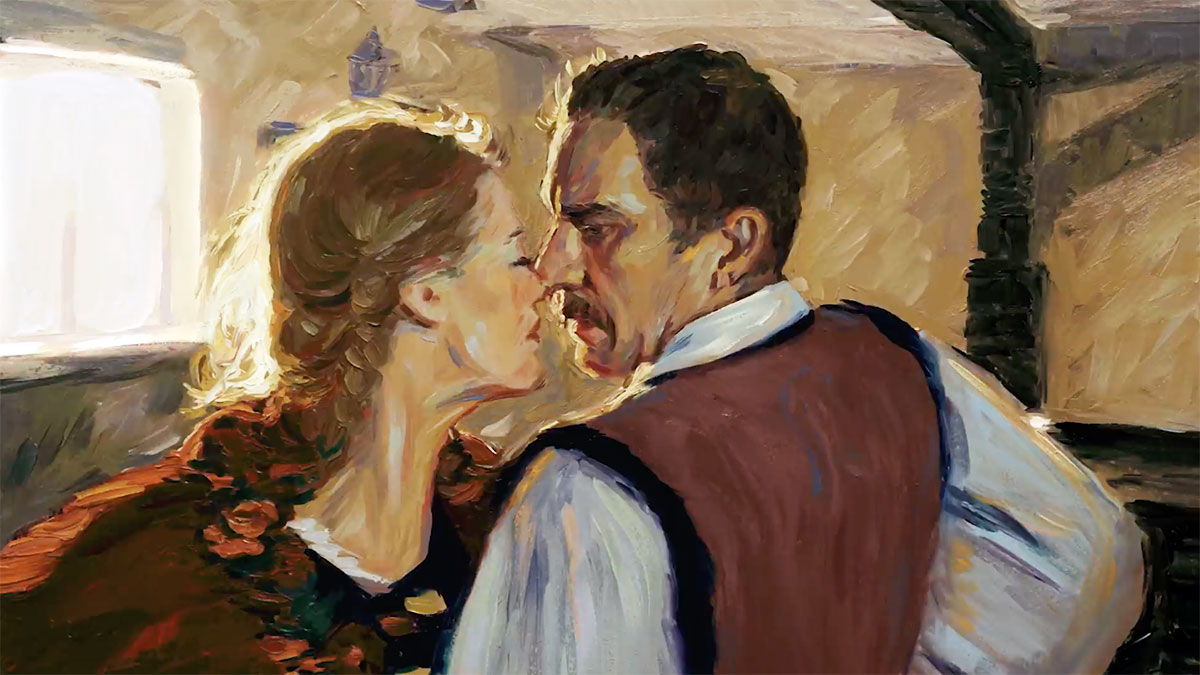 "Loving Vincent" Team Drops Teaser for New Movie "The Peasants". New Europe Picks up World Sales Rights. BreakThru Films, the animation studio behind the Oscar® nominated ‘Loving Vincent’ and Oscar® winning ‘Peter & The Wolf’ has commenced principal photography on their new film ‘The Peasants’ based upon the Nobel Prize-winning novel by Wladyslaw Reymont. The film will be directed by Oscar® nominated director Dorota Kobiela and will be produced in the same painting technique as her previous film ‘Loving Vincent’. Today the studio dropped the concept teaser for the new movie, which once again brings paintings to life to tell a powerful emotional story.

’The Peasants’ is a tragic story of a peasant girl Jagna forced to marry a much older, wealthy farmer Boryna, despite her love for his son Antek. With time, Jagna becomes the object of envy and hate of the villagers and has to fight to preserve her independence. Set in the Polish countryside on the cusp of the 19th and 20th Centuries, the story’s dramatic turns tie into the changing seasons, hard labour in the fields and traditional local holidays.

After years of working on a film about Vincent van Gogh I felt a strong need to tell a story about women: to show their struggles and their passion and their strength. – says Dorota Kobiela, the screenwriter and director of the movie.

‘The Peasants’ will be produced by Breaktru’s Sean Bobbitt and Hugh Welchman, who also co-wrote the script. The movie will use the same painting technique that won the hearts of fans around the world with ‘Loving Vincent’, which was also nominated for the Golden Globe and BAFTA and made $52m at the global box office. It is the most successful Polish film of all time at the international box office.

Initially, we will shoot the movie with actors, and then paint each frame as a separate oil painting. More than sixty painters will work in three studios to complete the 79,000 frames making up the film. - explains Tomasz Wochniak, line producer at BreakThru Films.

The epic novel of Wladyslaw Reymont will be brought to life using the popular realist and pre-impressionist paintings from the 19th Century, with an emphasis on the Young Poland Movement and the works of such artists as Józef Chełmoński, Ferdynand Ruszczyc and Leon Wyczółkowski. The team feels that this style perfectly reflects the spirit of the book.

The film’s premiere is planned for late 2022. World sales for the movie are handled by Jan Naszewski’s New Europe Film Sales, responsible for the international success of movies, such as Oscar® nominated Corpus Christi by Jan Komasa and Cannes-winning ‘Rams’ by Grimur Hakonarsson and Valdimar Johansson’s upcoming ‘Lamb’ starring Noomi Rapace. The company will be preselling the film at the market in Toronto.

The Screenwriter and The Director – Dorota Kobiela

Dorota Kobiela is the originator, writer, director and editor of the movie ‘Loving Vincent’; the world’s first and only fully painted feature film, hand painted by over 100 oil-painting animators. ‘Loving Vincent’ won Best Animation Feature Film at the European Film Award, the 20th International Shanghai Film Festival, and over 40 other awards around the world. The film was nominated for an Oscar®, a Golden Globe and a BAFTA and made $52m at the global box office. It is the most successful Polish film of all time at the international box office. Dorota is a member of the American, European and Polish Film Academy. She works at the art commission of the Polish Film Institute. She has been professionally associated with the studio Breakthru Films for 10 years.

The Peasants’ is being produced by Breakthru Films (Poland). Founded by Hugh Welchman, BreakThru Films is a prize-winning film and animation production company, based in Gdansk, with offices in Lodz, Warsaw and London. BreakThru established its reputation with its slate of prize-winning shorts which have collected over twenty international awards & nominations, including two BAFTA nominations, an official selection at Cannes, the Annecy Cristal and Annecy Audience awards, Canal+ Prize, TCM prize, the Rose D’ Or as well as an Oscar for Best Short Animation Film for ‘Peter & The Wolf’.

The latest production of the studio – ‘Loving Vincent’ won worldwide success and picked up 24 Audience Awards at film festivals, including the coveted Annecy Cristal at the world’s biggest animation festival, and was nominated as best feature animation in the world’s most prestigious award events including The Oscars and the Golden Globes.

A graduate of Oxford University, the UK's National Film and Television School, Hugh has produced 16 short films and two feature films for his company Breakthru Films, winning over 60 prizes at international festivals, including the 2008 Best Short Animation Oscar for ‘Peter and the Wolf’ and European Film Award for ‘Loving Vincent’.