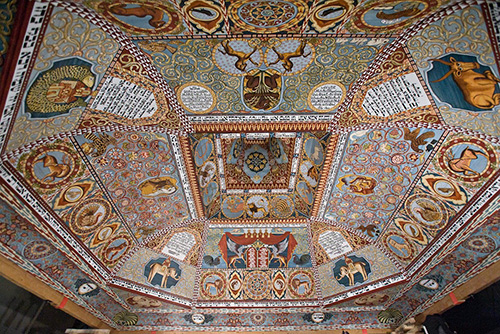 The YIVO Institute for Jewish Research and the Polish Cultural Institute New York are proud to present Handshouse Studio with a behind-the-scenes look at the reconstructed Gwoździec Synagogue: the centerpiece of the core exhibition of Warsaw’s new Museum of the History of Polish Jews.

The Gwoździec Synagogue was one of nearly 200 centuries-old wooden synagogues in Poland, all of which were systematically destroyed by the Nazis during the Second World War. The 16th-century synagogue in the eastern Polish town of Gwoździec (now Hvizdets’ in Ukraine) was renowned for its spectacular polychrome paintings on the ceiling and interior walls. Handshouse Studio, a Massachusetts-based educational non-profit organization, undertook the task of reconstructing the roof, ceiling and bimah of this synagogue, to serve as the centerpiece of the core exhibition of the Museum of the History of Polish Jews in Warsaw, which is opening officially on Oct 28.

Handshouse worked with 296 historians, architects, students artisans and artists, using period tools and traditional building and paint-mixing techniques, in the process reviving a lost building tradition. The rebuilding project toured eight Polish cities, where Handshouse led workshops to engage local people in the Jewish history of their areas, as well as teaching traditional craftsmanship and painting techniques. The reconstruction was created by Handshouse Studio in collaboration with the Association of the Jewish Historical Institute of Poland and the Museum of the History of Polish Jews.

Making/History: The Reconstruction of the Gwoździec Synagogue will feature Laura and Rick Brown, co-founders of Handshouse Studio, who will speak about the multi-year process of reconstructing the synagogue. Cary Wolinsky of Trillium Studios will also present excerpts from their documentary Raising the Roof: Gwoździec Synagogue.

WHAT:
Handshouse Studio: Making/History: the Reconstruction of the Gwoździec Synagogue

THE POLISH CULTURAL INSTITUTE NEW YORK, established in 2000, is a diplomatic mission to the United States serving under the Ministry of Foreign Affairs of the Republic of Poland. The Institute’s mission is to build, nurture, and promote cultural exchange between the United States and Poland by presenting Polish culture to American audiences and by connecting Polish artists, researchers and scholars from various fields to American institutions, introducing them to their professional counterparts in the United States, and facilitating their participation in contemporary American culture.

The YIVO INSTITUTE FOR JEWISH RESEARCH was founded in Vilna, Poland, in 1925, and relocated to New York City in 1940 with the mission to preserve, study, and perpetuate knowledge of the thousand-year history and culture of Jewish life in Eastern Europe. Today, YIVO’s archival and library collections are the single largest resource for such study in the world. YIVO offers cultural events and programs throughout the year, educational programs, scholarly publications, and fellowships. www.yivo.org

HANDSHOUSE STUDIO is a non-profit, innovative, educational organization that creates adventurous hands-on projects through community-service, building projects with non-profit partners around the world as a way to explore history, understand science, and perpetuate the arts. Handshouse, co-founded by Rick Brown and Laura Brown in 2002, is located in Norwell, Massachusetts. It has gained international recognition for its pedagogical method of connecting institutions and organizations to carry out bold and complex educational built projects. www.handshouse.org