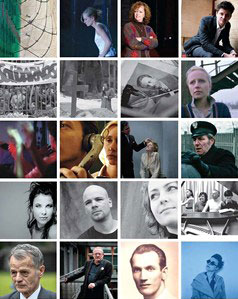 This season's Ways to Freedom film series at MoMI will show Polish reality before 1989, in Andrzej Wajda's Man of Iron, Krzysztof Kieslowski's Blind Chance, Ryszard Bugajski's Interrogation and others. Former opposition activist Adam Michnik will offer his firsthand perspective of the struggle for democracy at the New School, and Andrzej Panufnik, a composer who fled censorship into exile in London, will be featured by the American Chamber Music Ensemble at (Le) Poisson Rouge. We also salute the winner of the first Solidarity Prize, Crimean Tartar leader and activist Mustafa Dzhemilev, who reminds us that the struggle for freedom continues around the world.

This year also marks the centennial of one of the greatest heroes of the Polish Home Army in World War II. Jan Karski risked his life to travel between Nazi-occupied Poland and the West, bringing the first eyewitness testimony of the Holocaust to Allied leaders. He has been honored by Yad Vashem as Righteous Among the Nations and posthumously awarded the Presidential Medal of Freedom by Barack Obama. In November the Jan Karski Educational Foundation and the New York Public Library will celebrate the republication of his memoirs. The Museum of Jewish Heritage will screen a new documentary about Karski's life. We also offer the first in a series of profiles of historical museums in Poland: in this issue, the new Museum of the History of Polish Jews. Our next issue will feature the Museum of the Warsaw Uprising. This year marks the 70th anniversary of this heroic uprising against the Nazi occupation of Poland, and the Polish Cultural Institute New York joins all Poles in remembrance of this momentous event in our country's history.

Even as we reflect on the past, we continue to capture the essence of Poland's vibrant contemporary cultural scene. Later this year we will join the Polish Book Institute and the Polish Cultural Institute London to celebrate Philip Boehm, winner of the annual Found in Translation Award for Polish literature translated into English. Columbus Circle, a popular landmark at the southwest corner of New York's Central Park, will host Joanna Malinowska's monumental sculpture of Smokey Bear, drawing attention to our troubled relationship with the natural world. In Chicago, the Illinois Modern Ensemble will feature contemporary music by Polish composers, who came of age after the fall of Communism. Finally, we are thrilled to once again co-host Grzegorz Jarzyna's theater company, TR Warszawa, for his production of Sarah Kane's 4:48 Psychosis at St. Anne's Warehouse, starring renowned Polish actress Magdalena Cielecka.

The Polish Cultural Institute New York continues to foster the development of contemporary Polish artists by supporting residency programs with our partner institutions in the US and Poland. We also bring American cultural professionals, programmers and journalists for research trips to Poland, building links between our two countries and helping to shape Polish-related cultural programming here in the United States.

We wish you all the best for the coming season, and invite you to join us and our partners in New York, Chicago, and across the United States.

For our full program, please follow the link below.