Grazyna Auguscik and her Group in New York 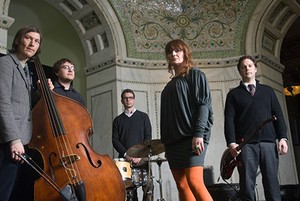 On October 19, 2014, Man Behind the Sun: Songs of Nick Drake GRAZYNA AUGUSCIK GROUP

Polish-born, Chicago-based singer, composer, arranger, and producer Grazyna Auguscik has won the praise and admiration of music critics, and jazz enthusiasts with a singular voice that speaks a universal language. Described as "one of the hottest jazz talents in the country" (American Jazz Scene), she is also one of the most intriguing contemporary vocalists on today's world jazz scene. Her unorthodox approach to rewriting classic works is at once a tribute to its authors and an adventure into uncharted territory.

With her unique project "Man behind the sun," Grazyna Auguscik pays homage to the late cult artist Nick Drake. Admired for his poetic, sad, mournful lyrics, and the melancholic charm of his music, he became an inspiration for many contemporary artists. "Drake's music takes me to a deep world" says Auguscik. "You simply cannot stop listening to it. It's just addictive." Although several musicians have covered Drake's music (including R.E.M, Beth Gibbons, Norah Jones, or Brad Mehldau), Auguscik's "Man behind the sun" is the first such effort that dedicates entire album to the artist's legacy. Critics praise the album "Auguscik delivers choice performances of Drake's dreamy melodies and evocative lyrics. In particular, her velvety tone and vulnerable delivery are a natural fit for Drake's compositions" (Chicago Jazz Magazine).

Presented by DROM in partnership with Kulture+ Productions and
the Polish Cultural Institute New York.