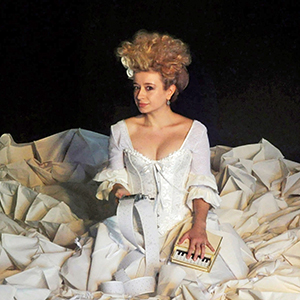 This is a solo performance based on the life of Nannerl Mozart. The play will have a full run at the Here Arts Center NY, NY : Jun 22 - Jul 12 2014

THE OTHER MOZART, written and performed by Sylvia Milo, is a play about Nannerl Mozart, the sister of Amadeus. It tells the true story of this prodigy, a keyboard virtuoso and composer, who as a child toured through all of Europe performing with her brother, to equal acclaim, but who faded away and left behind nothing of her own. The show is set in, on and underneath its costume: a stunning dress some eighteen feet in diameter, which spills over the entire stage. Original music was composed for instruments Nannerl knew intimately, such as clavichords, music boxes, and bells, as well as teacups, fans, and other ordinary objects that might have captured her imagination.