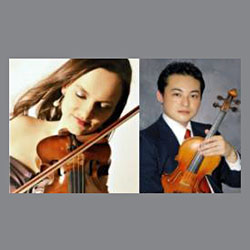 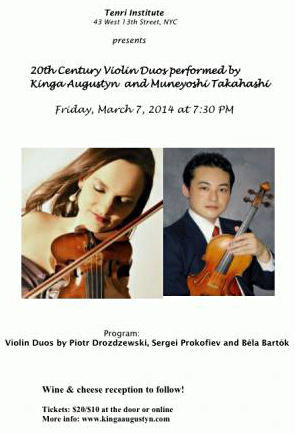 Award winning Polish-born and New York City-based violinist Kinga Augustyn has been described as “an adventurous performer valuable to New York’s scene” (NY Concert Review), “a violinist for whom nothing seems too difficult” (Nowy Dziennik Polish Daily News), “stylish and vibrant” (The Strad Magazine), and “beyond amazing, one hell of a violinist!” (The Fanfare Magazine). She has performed as a soloist with orchestras in the United States and Europe. Among them are the Magdeburg Philharmonic Orchestra, the Chamber Orchestra Leopoldinum, the Wroclaw Philharmonic Orchestra, the American Academy of Conducting Orchestra at the Aspen Music Festival, the Empire State Sinfonia, the Manhattan Symphonie, the Gateway Classical Music Society Orchestra, the Broadway Bach Ensemble, the Glacier Symphony, and the Augusta Symphony Orchestra.

In addition to her many orchestra appearances, she maintains a busy concert schedule as a recitalist and chamber musician with appearances at Carnegie Hall (in both the Stern Auditorium and the Weill Recital Hall), Alice Tully Hall, The Metropolitan Museum of Art, Merkin Hall, The Kosciuszko Foundation, Bargemusic, The Aspen Music Festival, The Polish Embassy in Washington, DC, and the Preston Bradley Hall at Chicago’s Cultural Center (Dame Myra Hess Memorial Concerts Series), among others. She has also performed as a featured artist at music festivals such as the Paderewski Festival, the Sevenars Music Festival, the Chopin & Friends Festival, and the Emerson Quartet International Chamber Music Festival. Her prestigious collaborations also include solo performances with The Jose Limon Dance Company at the Joyce Theater in NYC.

Kinga Augustyn has recorded Glen Roven’s Runaway Bunny CD for GPR Records, with Catherine Zeta- Jones as a narrator, pianist Jeffrey Biegel and cellist Robert DeMaine, as well as Kenneth Fuchs’ Falling Trio released on Naxos. Committed to increasing awareness of music by Polish composers, as well as promoting contemporary music, she has premiered and recorded Michael White’s works composed especially for her: his Sonata for Violin and Piano (2009), Trio Sonata (2008), and the Quartet for Piano and Strings. Ms. Augustyn’s new album of Polish Violin Music was released in June of 2013 on Naxos, and her new contemporary music CD will come out in 2014. Augustyn’s early discography includes Niccolo Paganini 24 Caprices for Solo Violin.

Kinga Augustyn began her music studies at the age of seven in her native Poland. Later on she went on to study at The Juilliard School, where she worked with Dorothy DeLay, Cho – Liang Lin, and Naoko Tanaka, and earned both the Bachelor and the Master degrees. She holds a doctorate from the State University of New York at Stony Brook, where she took lessons from Phil Setzer and Pamela Frank. Her former teachers include Aleksandra Bogdan, Zbigbniew Szuflat, Petru Munteanu, Piotr Milewski, and Kurt Sassmannshauss.

As a teacher, Ms. Augustyn has served as a Violin Faculty for The Alexander & Buono Festival of Music. She has also conducted various violin, piano and chamber music masterclasses and workshops in the United States and Poland.

Eugene Muneyoshi Takahashi has been enjoying a versatile career both in the US and abroad. Born in Kanagawa, Japan, he started his violin study at age three. Prior to relocating to the US, he actively free-lanced in Tokyo playing with major orchestras and also working in the recording industry. He has played for over 600 recordings for movies, TV shows, commercials and pop artists. Now he is based in New York and continues his adventure in music and life. He plays at venues such as Carnegie Hall, Lincoln Center, Merkin Hall and Symphony Space. He is member of the Albany Symphony Orchestra and Iris String Quartet.

The 2012-13 season was highlighted by a Carnegie Hall concert with the Albany Symphony Orchestra; the Bahama Tour with Ensemble du Monde; five performances in Scotland with violinist Tatsuya Yamauchi; and a performance with the GPR Festival String Quartet covered by NY 1 and the New York Times. His foreign engagements in 2014 include a performance in Tokyo, Japan and a concert with Iris String Quartet in Reykjavik, Iceland.

He has been concertmaster of Ensemble du Monde, Nova Philharmonic, One World Symphony, Toho Gakuen Orchestra Achademy, and guest concertmaster of the Japan Philharmonic. He has also played with orchestras such as the American Symphony, Charleston Symphony, Izmir Symphony(Turkey), New Japan Philharmonic, NHK Symphony, and the Rochester Philharmonic. He has participated in renowned music festivals such as Pacific Music Festival, Takefu International Music Festival and Miyazaki International Music Festival, where he had opportunities to work with artists such as Martha Argerich, Joshua Bell, John Corigliano, Charles Dutoit, Valery Gergiev, Bernard Haitink, Fabio Luisi and Krzysztof Penderecki among others.

A graduate of Eastman School and the top honor recipient from Toho Gakuen School of Music in Tokyo, he has studied violin with Koichiro Harada, founder of the Tokyo String Quartet, and Mikhail Kopelman, former leader of the Borodin String Quartet. He was semi-finalist of Japan Music Competition and Grand-Prix winner of Toho Transcendental Technique Competition. He had master classes with Thomas Brandis, Zakhar Bron, Vadim Gluzman, Rainer Küchl, Philippe Quint, Shinichi Suzuki and Zvi Zeitlin.