"My War, My Life" by K. Sophie Stallman, who survived years of Hitler’s Nazi brutal occupation of Warsaw, Poland 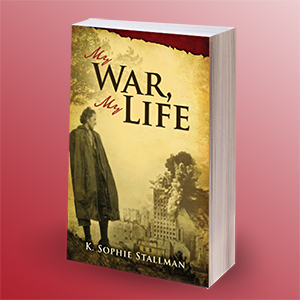 "My War, My Life" by K. Sophie Stallman

“My War, My Life” by K. Sophie Stallman has recently been published by Mill City Press. It is a true story as seen through the prism of a young teenage girl’s eyes that lived and survived through five years of Hitler’s Nazi brutal occupation of Warsaw, Poland.

Three generations ago, author Sophie Stallman was a young girl living a normal and happy existence with her traditional and privileged Polish family. But when the Germans invaded Poland on September 1, 1939, Sophie’s life as she knew it ceased to exist.

While most of the Europe eventually suffered under the Nazi’s boot, Poland’s occupation was the harshest. The whole population suffered daily from deprivation, fear and struggle. In spite of difficulties Sophie pursued her own life pressing forward with her academic education and following her love of music and artistic talent. She excelled developing her modern dance skill and mezzo-soprano voice. Also following her patriotic duty, she made the courageous decision to join the Polish resistance organization—a move that would put her life in constant jeopardy, especially during the struggles of two months long city fights during the 1944 Warsaw uprising.

Next August 1st 2014, Warsaw will celebrate the 70th anniversary of the Warsaw uprising. Sophie, like most old combatants who are still alive will trek back … to remember.

“My Life, My War” is an extraordinary story of one girl’s battle to not only survive the tragedies and challenges she faced in WWII, but to continually rise above any adversity. Her life serves not only as a moving testimony to the strength and endurance of the human spirit, but as a tribute to those who were not able to leave Warsaw alive.

Available through Amazon >>> and Barnes >>>

About the Author:
Sophie Stallman was born in Poland and lived in Germany from the end of World War II until 1956, when she arrived in California with her first husband and two children. Sophie was instrumental in establishing woman’s gymnastics in Northern California. She currently resides in Portola Valley, California.