PAWEL ALTHAMER: THE NEIGHBORS at New Museum in New York 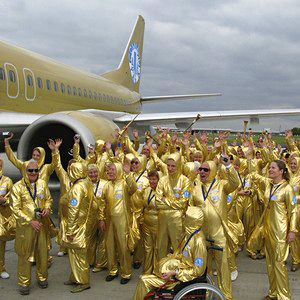 The New Museum introspective exhibition, curated by Massimiliano Gioni (Associate Director and Director of Exhibitions) and Gary Carrion-Murayari (Curator) and titled Pawel Althamer: The Neighbors, will be the third presentation of the artist's work at the museum.

Pawel Althamer is one of the most influential artists to emerge globally in the 1990s, yet his work has been shown only occasionally in the United States. Opening in February 2014, the New Museum will present the first major US museum exhibition devoted to his work.

The New Museum introspective exhibition, curated by Massimiliano Gioni (Associate Director and Director of Exhibitions) and Gary Carrion-Murayari (Curator) and titled Pawel Althamer: The Neighbors, will be the third presentation of the artist's work at the museum. The show will feature a number of Althamer's iconic sculptures and performative videos, works that cumulatively demonstrate how Althamer understands himself and the world around him through a variety of media.

Over the past two decades Althamer's unique sculptural practice has sought to engage with and represent the various personal relationships and communities in which he participates. From an early stage in his career, Althamer has focused on a consistently experimental model of social collaboration between viewers and the artist. The exhibition will include a new presentation of the artist's work The Draftsmen's Congress, which encourages a joint artistic creation and dialogue. Throughout the course of the exhibition, the blank white walls of the museum's fourth floor gallery will be transformed through the gradual accumulation of drawings and paintings by visitors and a wide array of community organizations. The resulting installation will document the presence of these diverse groups and will function as their shared portrait. This work was originally presented at the 7th Berlin Biennale in 2012, curated by Artur Zmijewski, another widely recognized Polish artist of the same generation.

The exhibition will include The Venetians, a ghostly group of sculptures created for the 55th Venice Biennale in 2013. Althamer took casts of strangers on the streets of Venice and turned them into larger individual sculptures and group portraits in the small plastics factory previously operated by his father, which Althamer has recently revived. These figures present an image of Venice and its inhabitants, otherwise invisible in the context of the Biennale. Through all of the works on view of various media, the exhibition will show Althamer as instigator, organizer, teacher, scientist, and visionary.

The show will be accompanied by a fully illustrated catalogue featuring an interview with the artist and new essays on Althamer's practice by Boris Groys, Joanna Mytkowska, and Artur Zmijewski.

This presentation is made possible in part through a partnership with Polish Cultural Institute New York.

The accompanying publication is made possible by the J. McSweeney and G. Mills Publications Fund at the New Museum.