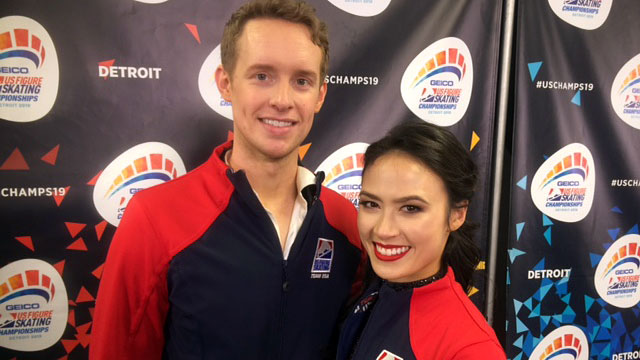 Madison Chock and Zach Bates in Detroit just back from Poland.

The skaters refer to the event with one word, “Nationals” and work up to showcasing here with quite reverence and resolve. Co-hosted by the Detroit Skating Club and the Detroit Sports Commission, the United States Figure Skating Association presented their annual championships at the fabulous Little Caesars Arena. They had standing room crowds.

The U.S. Championships, held since 1914, are the nation’s most coveted figure skating crown in the United States.  Champions were determined in ladies, men’s, pairs and ice dance at the senior, junior, novice, intermediate and juvenile levels of the U.S. Figure Skating Association.

The spectators came to celebrate the history of the sport along with crowning the new medal winners.

Tara Lipinski acted as color commentator for NBC Sports.  She said, “I am back at one of my favorite events of the year!  Nationals are just so special.  Life is good when I’m talking skating.”

Lipinski, a native daughter of Washington Township, Gloucester County, New Jersey had this to say about the new women’s champion, Alysa Liu.  “Records are meant to be broken and I couldn’t be more excited that Alysa was the one to break it.  What a talent!  So well deserved.  Twenty-two years ago I tried to push the technical envelope and now Alyssa has taken it to the next level.  She is the future of US ladies skating.

Liu became the youngest lady in U.S. Figure Skating history to earn the title - U.S. champion.  The 13-year-old Liu topped the field by nearly four points with a score of 217.51.  She earned 143.62 points in her free skate and became the first lady in American history to land three triple axels in a competition.  “When my score came out, I still thought it isn't over because there was still one more skater,” Liu said.  “I was really happy with the score.  I was just happy I beat my personal record and did a clean long program.” 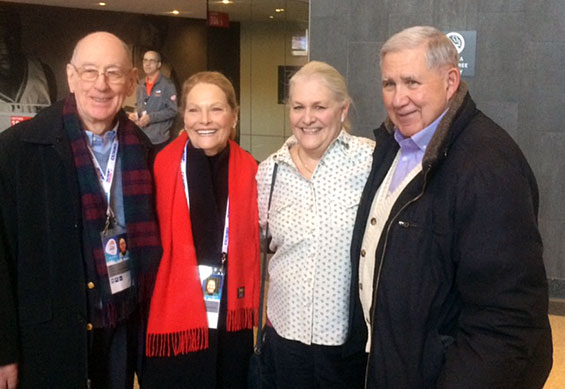 The three ice-dancing teams that medaled all had Michigan connections.  Madison Hubbell and Zachary Donohue won their second consecutive U.S. ice dance title.  They were in first after the rhythm dance and then posted a score of 131.32 to claim the free dance and finish with an overall score 215.88.  Hubbell said post-skate, “I think in this performance more than ever before Zach and I were really connected.  We kept looking into each other’s eyes, so we created a bubble and there wasn’t a realization until the end.  We were in bubble time, but to find a way to open up our bubble and see everyone standing, it was really special.”

She commented previously, “I think our sport is very unique in the way that we mix grace and emotion with athletic exercise.  We are doing very hard things, that we have to train every week of the year, and yet during the performance, we try to hide all of the effort.  I think that's the hardest thing about our sport.”

Madison Chock and Evan Bates finished second in only their second competition of the season. They earned 129.19 points for their free dance and finished with an overall score of 211.52.  Chock is still rehabbing a major ankle operation.  Chock said, “We are very happy.  Happy to be back and happy to be in Detroit.  The crowd was incredible.  The ice was great.”

Chock and Bates recently won the Mentor Toruń Cup in Poland.  Said Chock, “It was grueling…..three connections and a 20 hour plane trip but we persevered.  On the last day in the old section of town, we had a pierogi party and dinner to celebrate our victory.”

“We are back, fully back,” said Bates.  Kaitlin Hawayek and Jean-Luc Baker earned the bronze with 196.95 total points.  All three teams train in Montreal currently.

Ashley Cain and Timothy LeDuc won the U.S. pairs title after being second after the short program.  The duo scored 141.89 points for their free skate and posted an overall score of 212.36.

It was 25 years ago (January 1994) when Detroit last hosted the “Nationals.”  A man with a black metal extension baton (like police use) whacked Nancy Kerrigan just above the right knee as she left a practice session at Cobo Arena.  The attacker, later identified as Shane Stant, broke a glass door at Cobo Arena to further his escape.

Later in the month, Tonya Harding became embroiled in controversy when it became fact that her ex-husband, Jeff Gillooly, orchestrated the attack on Kerrigan.  After the 1994 Winter Olympics, Harding ultimately pleaded guilty to hindering the prosecution.  On February 5, 1994, the disciplinary panel of the U.S. Figure Skating Association stated reasonable grounds existed to believe Harding had violated the sport's code of ethics.  On June 30, 1994 she was as banned for life from the U.S. Figure Skating Association.