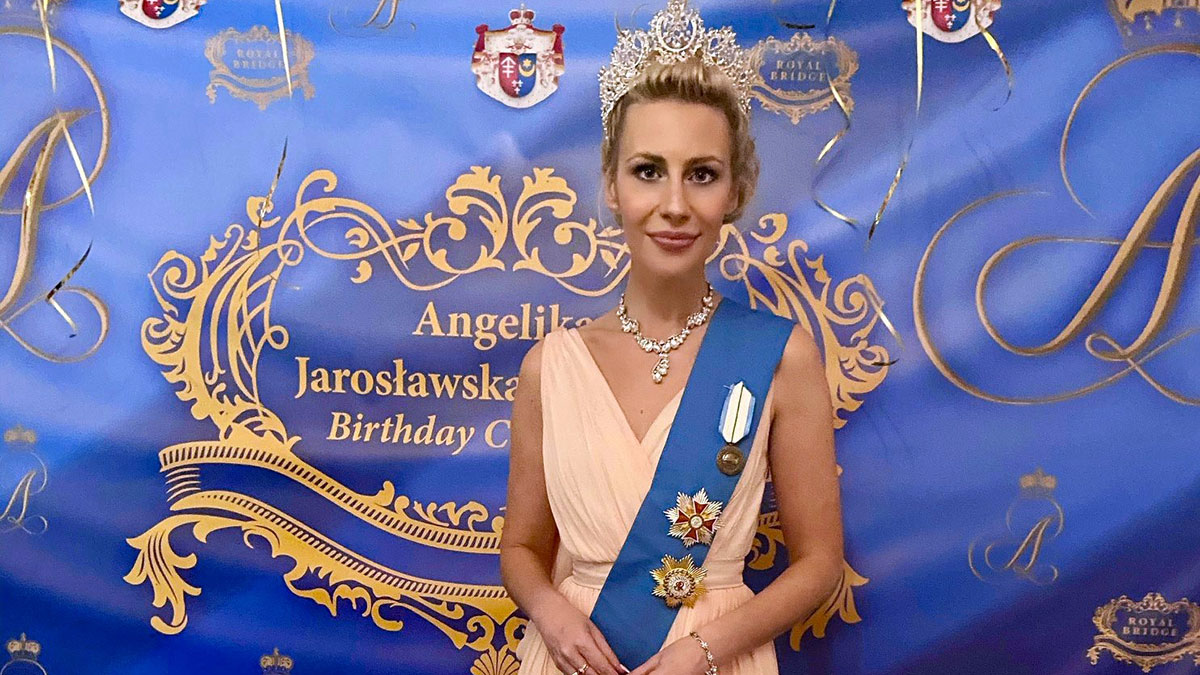 Artists, aristocracy, diplomats, and representatives of many organizations cooperating with the UN among the guests.

On 15 August 2020, in the Drwalewo Palace 41 kilometers south of Warsaw, a birthday celebration of the duchess Angelika Ewa Jarosławska Sapieha was organized. It coincided with the official visit of the United States Secretary of State Mike Pompeo, whom the duchess Angelika met last year at the Three Seas Initiative Summit last year.

15 August is a very important date for the Poles. Firstly, it’s the day of The Assumption of Mary into Heaven and the Feast of the Polish Armed Forces. This year it’s also the 100th anniversary of the Battle of Warsaw. The victory has become known as the Miracle on the Vistula.

Thus, the day of the celebration began with a Mass In St. Anne’s Church In Piaseczno, where the IX Grand Master of the Order of St. Stanislas, Count Jan Zbigniew Potocki along with the Grand Magistry conducted an investiture, during which an officer of the UN peacekeepers Yuriy Donskoy, Dr. Eicho Kim from South Korea and an artist Leonard Szczur from Chicago were awarded an Order of St. Stanislas in gold II Class for their social, humanitarian and cultural activities and work for world peace.

During the investiture on this special day, the duchess Angelika Ewa Jarosławska Sapieha was promoted by the International Magistry to the rank of the Grand Duchess of Poland and was appointed the Grand Intercontinental Chancellor of the Order of St. Stanislas. The parish priest blessed the promoted and those in attendance honored this fact with thunderous applause.

King of Poland August Stanisław Poniatowski established the Order of St. Stanislas Bishop and Martyr on 7 May 1765 and became its first Grand Master. Last year, Angelika Jarosławska Sapieha was awarded this prestigious Order after a solemn Mass in St. John’s Archcathedral in Warsaw on 23 March 2019 and thus became the youngest Dame of the Order.

The duchess turned 30 on 13 August, whereas the birthday celebration was held on 15 August. The guests from the farthest corners of the earth were arriving from 5 p.m.

Speaking of the palace, let us remind, that it is a historic palace, built-in classicist style in 1820, by a renowned architect of the time of The Kingdom of Poland Frederick Albert Lassel. It’s a mainstay of Polishness and a beautiful symbol of chic and style of the former days. The guest entered by a gate which leads to the palace by a long historical tree-lined avenue with romantic lamps. On their way, they passed by tables informing that they were arriving at the reception of the duchess Angelika. A beautiful classicist and tall in front of the palace, surrounded by historical trees, welcomed the guest, overwhelmed by the place. In this hot August evening, crowds of the arrived guests gathered in the palace, garden, and a spherical, supported on a portico balcony with a view on treetops in the subtle light of hundreds of candles. The palace built in classicist style is decorated by an extensive garden, which is believed to have been designed by Jan Christian Suchow. Beautifully maintained old-growth forest and ponds constituted completion of an inseparable, very attractive entirety of the event. During the Invasion of Poland in 1939, the III/6 squadron was stationed in the palace.

The duchess organized in the palace reception for her 26th birthday in 2016, right after the finish of filming a movie hit „Dywizjon 303 Historia Prawdziwa” („Squadron 303”), of which she was an official Ambassador, and her foundation had been promoting the film internationally for over 2 years and co-financed its premiere.

The interior of the palace endeared itself to the guests with its refined elegance and timeless style.

The celebration had been prepared for several months in advance. For over 3 weeks gardeners had been taking care of trimming, lopping, and mowing the extensive lawn. Not only the course of the celebration but the musicians and the kind of music had been agreed on so that the sound of old music would remind former celebrations organized in the Royal Łazienki Park at the time of the King Stanisław August Poniatowski, Krasiczyn Palace of Sapieha and Krasicki or Łańcut Castle of Potocki and Lubomirski. It was a truly inspiring concert for the numerous guests, who thanks to it were able to get to know the beauty of Polish music.

A few days before the celebration, and over 100-year-old grand piano had been tuned by a master Jakub Michalski, who cooperates among others with Maestro Albert Grudziński.

An important element of the celebration was the symbolism of the musical pieces selected for this occasion. Romantic pieces and variations of Chopin could not miss, making the celebration resemblant to those organized on the royal courts of Great Britain, The Netherlands, Sweden, Denmark, Monaco, or Spain. The repertoire was completed by Wagner and Mozart, as well as many Old Polish pieces, also from the interwar period, and a vast range of jazz arrangements. Especially the arrangements of old Polish songs deeply touched the invited guests.

Poetry set to music by Ewa Demarczyk and Marek Grechuta also could not miss. That is why professional musicians under the baton of Przemysław Łozowski and a great vocalist, Dr. of Musical Arts Ilona Sawicka had been selected to perform at the celebration.

During the breaks, a DJ filled up the musical taste.

At the end of the celebration Marian Lichtman of a band „Trubadurzy” – the legend of Polish rock performed some special arrangements of songs.

The guest of the celebration had a chance to taste a truly sublime cuisine.

The charcuterie served at the palace’s tables were delivered from distant Leżajsk from a meat processing plant „Masarnia Osip” of Zygmunt Osip, which has been awarded by the President of Poland himself several times.

Numerous baking and pastry had been delivered not only from Warsaw, but also from Biłgoraj and Janów Lubelski – the heart of the land, which has been listed as the UNESCO World Heritage Sites, and where the duchess Angelika was raised. A wonderful birthday cake with a dedication came from the Roztocze region – the city of Biłgoraj.

The dishes were served on excellent and colorful porcelain tableware from Ćmielów, one of the oldest porcelain factories in Poland. It is worth adding that the city of Cmielów in Sandomierz voivodship was a property of the Duke Mikołaj Krzysztof Radziwiłł, Trąba coat of arms, in 1576. Cutlery named „Srebrne Księstwo Warszawskie” (Silver Dutchy of Warsaw”), with its silvery flash, brightened the recesses of the palace. Manufactured with 0.925 silver hallmarks in a Warsaw Factory of silverplated cutlery „Hefra”, established in 1824.

The organizers took care of the guest’s health in the COVID-19 era. The silver used in the cutlery kills microbes and works as a decontaminator.

The highlight of the event was the delivery of a surprise consisting of 6 thematic birthday cakes, with logos of campaigns supported by the duchess Angelika on top of them. The cakes entered the main ballroom of the palace at 9 p. m. sharp. They were accompanied by fanfare and dispatch by a nobleman of the Longbow Fraternity.
Wonderful cakes, decorated with fresh white flowers, were ordered at pastry chefs Przemysław Chudio and Anna Noskowicz from a Warsaw confectionery manufacture Pasticceria Mignon.

In a fabulous atmosphere, when gauzy dresses of Ladies flashed in the palace’s halls and the air was filled with flying gold and white confetti, two champagnes from the year of birth of Princess Diana for the occasion of her wedding with Prince Charles, brought from London by a friend of the duchess Angelika were opened.

That is because, the inspiration for all the activities of The Duchess Angelika Jarosławska Sapieha – an international Peace Ambassador, is the course taken by Princess Diana in her noble and charitable activities.

Princess Diana Frances Mountbatten-Windsor, the first wife of Charles, Prince of Wales, the son of the Queen of the United Kingdom Elizabeth II, died as a result of a car crash on 31 August 1997, when Angelika was 7 years old.

Today, it is the duchess Angelika who, as once Princess Diana did, provides patronage for numerous humanitarian activities, especially the global demining action and humanitarian activities conducted in Cambodia, Vietnam, and Laos among children living in extreme poverty and people with disabilities, who lost their health as a result of mine explosions.

Springwater was delivered from the Czarnorzecko-Strzyżowski Landscape Park protection zone.

Ecological juices also arrived from the East of Poland. Produced without preservatives, cold-pressed and manufactured by Tymbark and Adam Zamoyski’s Adamów company.

Wines were taken care of by Italian and French Sommeliers from Provence, Burgundy, and Lombardy, who selected the finest wines, among others: Château Pétrus Pomerol, Barone dell'Isola Francia corta Brut Chiara Ziliani, and champagnes. They had come all the way from the Champagne region, located in the North-East of France. They were then chilled in the Drwalewo Palace’s basements.

In the extensive basements of the palace, there was a scent of Cognac in the air. The guest could taste the finest Cognac from the French city of Cognac, which had matured in wooden barrels for over a decade. Picky Gentlemen were served with Irish and Scottish whiskey and an Old Irish alcoholic beverage of monks primarily used for health purposes.

Cuban cigars reigned in the cigar room. Famous Cohiba, an inseparable attribute of Che Guevara. Romeo y Julietta was also to be tasted. Even though the duchess does not smoke, a part of the Gentlemen took advantage of the degustation of the finest tobacco.

A delightful silk dress of the duchess was designed by a world-class fashion designer Teresa Rosati. On her head, there was a Duchess’ tiara, which presented beautifully with cleverly refined jewelry. For the Duchess birthday, there were over 700 white and gold balloons and 600 scented decorative candles ordered to complete the sensual and stylish ambiance and move back to the past centuries.

187 guests came to the strictly secured celebration. They had to proceed through two entry gates guarded by security.

After the celebration, a lorry filled with flowers accompanied the duchess on Monday and Tuesday, when she laid flowers at the Veterans’ Centre square in Warsaw, the monument of Józef Piłsudski near the „Belweder”, the monument of Mikołaj Kopernik in the Łazienki Park and the memorial sites in strategic points of Warsaw.

On Monday, 17 August the duchess Angelika laid flowers on Powązki Cemetery at the Aviator Monument, paid tribute to the legendary commanders and pilots of Squadrons, and to the officers and soldiers of the Polish Armed Forces.

A beautiful gesture that reminds about difficult pages of Polish history and our great heroes. The invitations for the ceremony, sent by an especially appointed team, were designed in accordance with the XIX century diplomatic protocol.

Online Educational Program "The Pilecki Project" for Institutions and Associations in the United States of America and Canada
Constitution of 3 May 1791
U. S. Embassy in Poland. Travel Information for U.S. Citizens - Alert
Celebrate Poland's Independence Day!
The 76th Anniversary of the Outbreak of the Warsaw Uprising
In 2020, Poland Can Have the Largest Drought in 100 Years.
Nancy Pelosi and Congressional Delegation Conclude Poland Visit to Mark 75 Years Since Liberation of Auschwitz
Poland: Angela Merkel's Historic First Visit to the Auschwitz
State Archaeological Museum exhibits restituted early Medieva. The opening of the “Lost-Found” exhibition.
SEE MORE