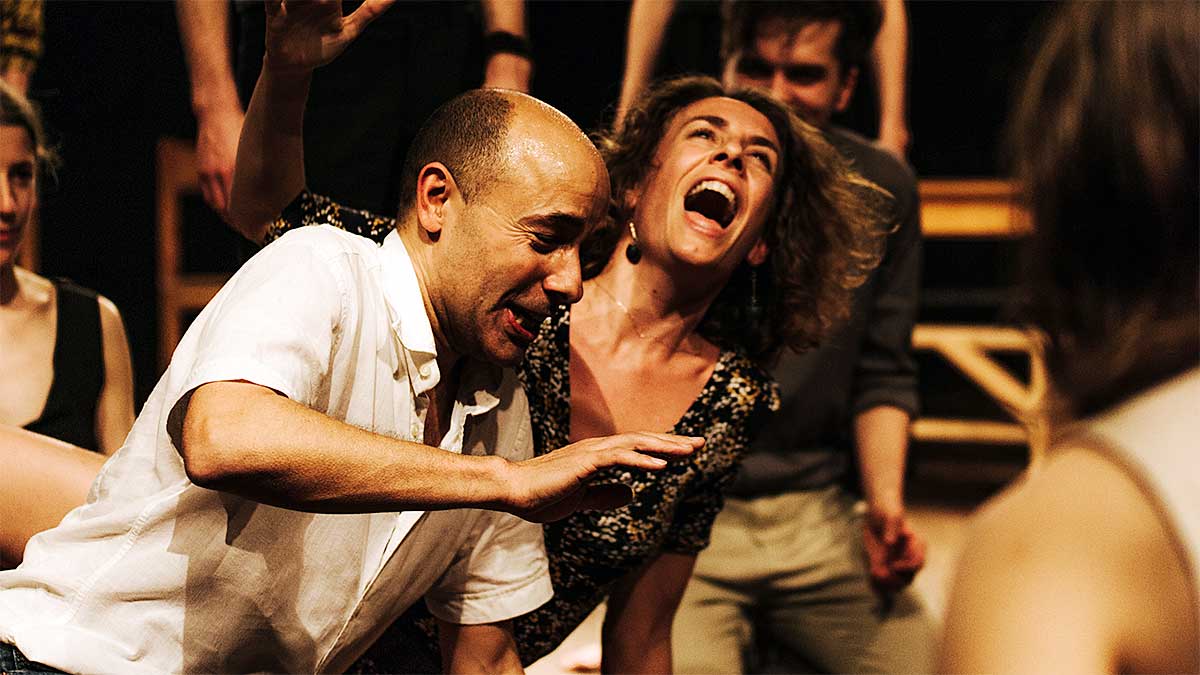 Chopin Theatre presents Theatre No Theatre in the project “GROTOWSKI to RICHARDS: SONG and ACTION" with public performance of SONGS and Masterclass workshop THE POTENTIAL OF SONG. All Events at Chopin Theatre Main Stage, 1543 W. Division St., Chicago IL.

CHICAGO (March 25, 2022) – The Theatre No Theatre team presently touring the US is comprised of Thomas Richards (US), Jessica Losilla-Hébrail (France) and Hyun Ju Baek (South Korea) all former members of the performing arts establishment the Workcenter of Jerzy Grotowski and Thomas Richards. Their project reflects on the legacy of the Workcenter established in 1986 in Pontedera, Italy, as well as on their present day international research.

“Working with Grotowski on ancient songs awakened something inside of me; gave me the sensation that I was hearing someone from my ancestry sing. This was a very deep experience for me. I'm half black and half white. I come from a mixed family. My father’s line comes from the Caribbean, and I grew up in NYC completely disconnected from any kind of African tradition. I went to a school that was almost all Jewish in fact. I wanted desperately to to be Black, to understand my Blackness, but without any means to do so. And when I met this Polish man with a white beard who kind of looked like Santa Claus, who had worked in the Caribbean so deeply, it was very bizarre. It was strange to encounter something of my African conditions somehow through him.”

“Our work is aimed at helping people recuperate contact with that which is hidden, through action. Your daily life, my daily life, all of our daily life is often made up of a more superficial part of oneself. We smile before we really smile. We frown before we really frown. We pretend to be humble when we’re not. A song can be a kind of call. You're singing, this song – and you perceive already in your being a kind of intention that is hidden inside the ancient song. An intention, a kind of desire to call to the surface a deeper strata from within. A way of relating yourself to something that is much greater than yourself can appear. And then a kind of process can start to flow and articulated itself through action, in which it’s as if all these levels of your human nature, which are awakening and intensifying through the work on the song, start to stack up so to speak, like a ladder, one on top the other, and a kind of special lived experience can take place, Grotowski used the term verticality.” - Thomas Richards (Based upon the podcast. Corrections by the Author. Podcast full link - https://culture.pl/en/podcast/SFTEW-20-CONTINUATION)

Performance audience must provide proof of vaccination OR proof of having Covid-19 within 5 months OR a negative rapid test which can be taken at Chopin Theatre.

Theatre No Theatre US tour at Balch St. Theatre (Akron) & Wayne State University and The Hinterlands (Detroit). Chicago events partially supported by Polish Consulate RP in Chicago and cooperation with Columbia College and other universities.

Songs, presented by Thomas Richards, former Artistic Director of the Workcenter and “essential collaborator” of Jerzy Grotowski. Mr. Richards will introduce us to the work on songs of tradition developed at the Workcenter since 1986. Songs, the presentation which follows, has its roots in a concept initiated in 1986 by director and performing arts theorist Jerzy Grotowski and which Thomas Richards has refined since Grotowski’s passing in 1999. The performing arts approach within this work, come to be known as “Art as Vehicle”, envisions art as a practical means to “work on oneself” fundamentally through a specific approach to song and action.

The Potential of Song is a two day Masterclass, conducted by Thomas Richards with the assistance of Jessica Losilla-Hébrail and Hyun Ju Baek, and is open to anyone wishing to deepen a practical work on singing. During the workshop, participants will be introduced to an exploration of a work on songs of tradition consisting in practical sessions of work on songs coming from Afro-Caribbean traditions, which have been at the core of Richards’ performing arts research for over 35 years. Such a work on song explores the potential impact that the rhythmic and melodic qualities of certain songs of tradition can have on the persons who sing.

Chopin Theatre is pleased to continue its three decades of presenting international theatre with this special event in cooperation with Columbia College Chicago and partially supported with a grant from the Polish Consulate of Chicago. Chopin has presented over 120 of its own productions mostly Eastern and Central European. It has hosted artists from each American state and from over 40 countries. After 30 years of operating as a for profit theater, Chopin Theatre became a non profit 501C3 (Jan 2020) and continues its mission of promoting enlightened civic discourse through a diverse range of artistic offerings.