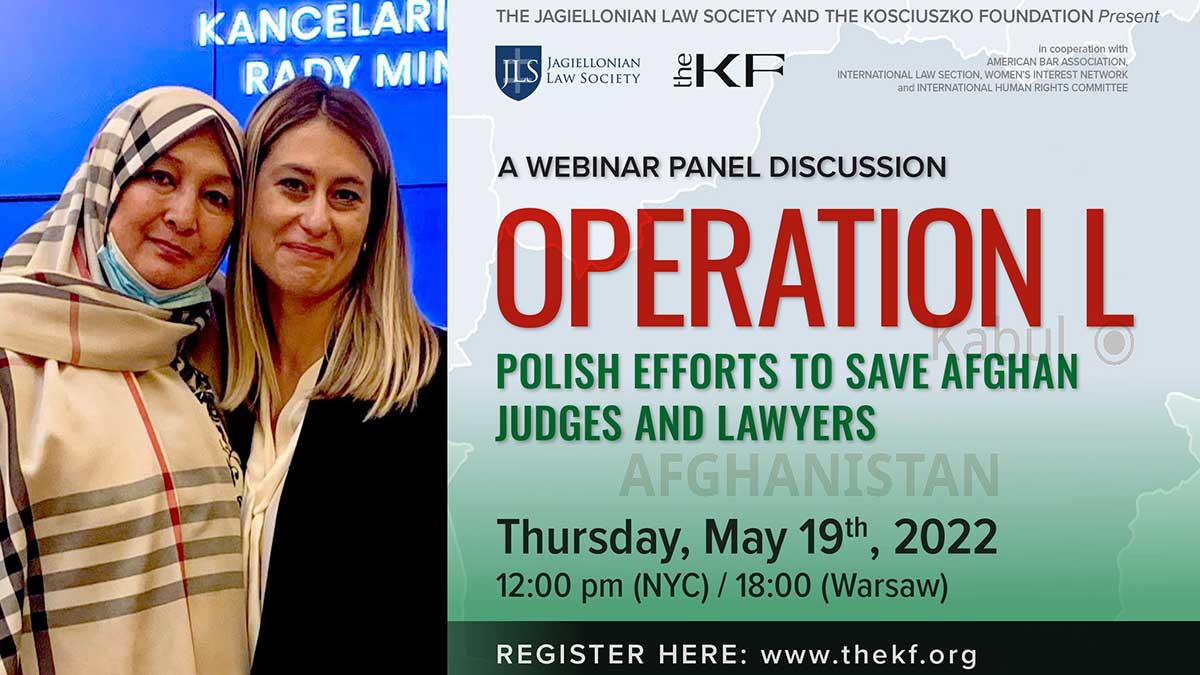 The webinar is presented jointly by The Kosciuszko Foundation and The Jagiellonian Law Society in cooperation with the American Bar Association, International Law Section, Women's Interest Network, and International Human Rights Committee.

When the US decided to withdraw from Afghanistan, thousands of Afghans, including women judges and lawyers, and many other professionals, found themselves in grave danger from the approaching Taliban forces. In response, Poland acted and evacuated over 1200 Afghans, among them almost 20 lawyers and judges with their families. Poland offered them a new home, and Polish lawyers have provided support and assistance in many forms.

This webinar will tell the story of the daring rescue mission and evacuation of women judges from Afghanistan, conducted in August 2021 by the Polish Special Forces. It is a story about how new technologies can change the course of events and how one tweet can make a difference. Finally, it is a story of human solidarity, hope, and old-fashioned human decency.

Art Classes for Children "Little Picasso" in Greenpoint. Summer 2022
In-Person Meeting with dr Eva Hoffman Jedruch in Greenpoint
Become KF Member and Win Round Trip Tickets to Poland with LOT Polish Airlines
Election to the Board of Directors and Audit Committee of the Polish and Slavic Center Inc. in New York
Meresha: Polish-Born Artist to Have Concert in Brooklyn. May 29, 2022
Polish American Folk Dance Company Open Rehearsal in New York
"Concert For Ukraine" at PSC in Greenpoint, NY
Fundraising Concert in Support of Ukraine at The Kosciuszko Foundation in New York on April 29
Theory of Protection with a Ukrainian artist Darya Koltsova
SEE MORE