An evening with Diane Ackerman 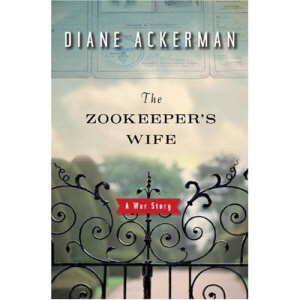 The Zookeeper\'s Wife, a War Story is a true story about the keepers of the Warsaw Zoo who saved hundreds of people from Nazi hands.

Author, poet, and  naturalist DIANE ACKERMAN, whose many works include the best-selling A Natural History of the Senses, was extraordinarily well qualified to  tell the little-known story of Antonina and Jan Zabinski who sheltered Jews  and Polish resisters in the animal sheds and in their villa. The Zookeeper\'s  Wife is a war  story unlike any other, a book about what it means to be human. Ms.  Ackerman will read excerpts and answer questions.

A Special Guest – TONY Award Nominee TOVAH FELDSHUH – will read an excerpt from a new  play by Oscar-nominated Dan Gordon, Irena\'s Vow, in which she will be starring as Irena  Gut, a 21-year-old Polish Catholic who rescued 12 Jews by hiding them in  the villa of a Nazi officer. Irena Gut was recognized by Yad Vashem as a Rightous  Among the Nations. The play will be presented in the fall by the Directors  Company and Invictus Theater Company, produced by Power Productions, Inc.,  and the Polish Cultural Institute (one of the performances also to benefit  the Museum of the History of Polish Jews).

Museum of the  History of Polish Jews is scheduled to open in 2010 on the site of the former Warsaw  Ghetto. The Museum will celebrate 1,000 years of Polish Jewish culture from  the first settlements to the revival of the Jewish community in postwar Poland. Any person who visits the Museum, if he  is Jewish he will be proud and if he is not Jewish he will walk out knowing  all there is to know about the Jewish history in Poland. For more information visit: www.mhpjnac.org or www.jewishmuseum.org.pl

Donation $100 per person to benefit the Museum includes autographed hardcover copy of The Zookeeper\'s Wife
Checks payable to MHPJ NAC or credit card payments, tax-deductible to the  extent permitted by law. For reservations and information please call 212-584-3300. Space is  limited.

The Museum of the History of  Polish Jews North American Council Committee of Support,in association with the Polish Cultural Institute, the Kosciuszko Foundation, and the Consulate General of the Republic of Poland