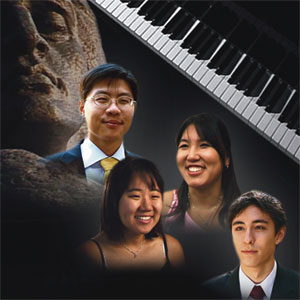 PIANISTS - DEFINING CHOPIN
is a story of four American pianists, the top winners of the US National Chopin Competition, as they represent the country at the 2005 International Chopin Piano Competition in Warsaw, Poland. The Chopin Piano contest in Poland is the oldest and the most prestigious piano contest in the world. This film unfolds in “cinema verite” style, as we follow the contestants through each stage of the grueling 30 daylong competition. We experience the individual highs and lows through the enormous psychological and physical toll they are required to endure and we learn what it really means to be a pianist: the price they pay. It is a tale of victory and defeat, of joy and disappointment, of great life experiences and adventure, always with Chopin’s magnificent music at its center. PIANISTS - DEFINING CHOPIN is also a profoundly educational film as it is highlighted throughout by teachers and students discussing the secrets of and approaches to Chopin’s music, analyzing the Polish nature of Mazurkas and Polonaises, trying to pin down whether there is an “ideal” interpretation of Chopin.

Tomasz Magierski’s excellent documentary about the 2005 International Chopin Piano Competition in Warsaw perfectly captures the joys and sorrows of musical competitions. Focusing on the American contingent of four young pianists, Magierski shows how the competition challenges, thrills, and disappoints them during the thirty-day event. Interwoven with conservations with Sean Kennard, Naomi Kudo, Esther Park, and Mei-Ting Sun are their rehearsals, performances, and travels about Warsaw, as well as interviews with pianists/teachers Edward Aldwell, Agustin Anievas, Seymour Bernstein, Enrique Graf, Yoheved Kaplinsky, Emilio del Rosario, Ruth Slenczynska, and Susan Starr. Magierski contrasts the innocence of the competitors with the wisdom of their mentors. He strives to make Pianists - Defining Chopin cinematic, speeding up the footage of the competitors sitting down to begin their performances to emphasize the assembly-line quality of the event and using an artistically composed overhead angle of a judge making notes about a performance. Editor Tomoko Oguchi never lets any scenes or shots linger too long as the film speeds nimbly through its eighty-seven minutes. Chopin himself receives considerable attention, with the commentators discussing the difficulty of playing his music.

NAOMI KUDO, began studying piano at the age of four, and her formal studies include instruction by Emilio del Rosario at the Music Institute of Chicago, and with Kum-Sing Lee of the Vancouver Music Academy. Kudo made her orchestral debut at age sixteen performing Tchaikovsky’s First Concerto with the Fort Worth Symphony Orchestra and, later that same year, with the Chicago Symphony Orchestra in Orchestra Hall playing Falla’s Nights in the Gardens of Spain. Kudo has received international recognition in several competitions: as the only American finalist at the 2005 Fifteenth International Frederic Chopin Piano Competition in Warsaw; Second Prize at the 2005 Seventh National Chopin Competition of the United States; First Prize at the 2003 Ninth Oberlin International Piano Competition; and First Prize at the 1999 Fifty-Third National Student Music Concours of Japan.Naomi Kudo is currently continuing her undergraduate studies at the Juilliard School as a student of Yoheved Kaplinsky.

De Lamar Mansion – the residence of the Consulate General of the Republic of Poland in New York, 233 Madison Ave. at 37th Street. The event is free and open to the public. All attendees must RSVP to secure admittance. RSVP by Wednesday, 26th, Tel: 646-237-2112, 646-237-2114, rsvp@polishconsulateny.org
De Lamar Mansion Salon of Arts & Ideas was inaugurated in October 2006 with the centennial celebrations of this Beaux-Arts period masterpiece of residential architecture in Manhattan.