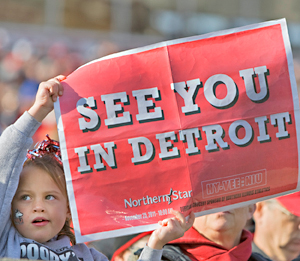 All ages of Northern Illinois University football supporters are getting ready for the Mid-American Championship game Friday at Ford Field in Detroit. Photo by Scott Walstrom, NIU Sports

The 2011 Marathon Mid-American Conference Championship will be Friday December 2, at 7:00 p.m. E.S.T. at Ford Field. Northern Illinois (9-3) will be making its second straight appearance and will take on Ohio University (9-3). The NIU mission statement says it best, “We develop CHAMPIONS in the classroom, in competition, and in life.

"Finally, we can stop talking about Detroit and go back,” first-year NIU coach Dave Doeren said.  The Huskies are led by duel threat senior quarterback Chandler Harnish.  He has big Joe Pawlak, the 6’5” 300 pound offensive lineman protecting him.  Pawlak, a senior has been a three year starter for NIU.  He had a spectacular game in helping beat Eastern Michigan 18-12 on Senior Day in DeKalb, Illinois.  NIU has 19 seniors and an improved defense wanting to redeem last year.  NIU lost to Miami 28-20 in the MAC final a year ago.

Ohio will be counting on a good quarterback also.  He is sophomore Tyler Tettleton who has a Detroit pedigree of sorts.  He is the son of former Detroit Tiger catcher Mickey Tettleton.

The Bobcats got to the title game by beating Bowling Green 29-29 as time expired.  Junior kicker Matt Weller connected on a 23-yard field goal on the last play.  The winning kick was his fourth field goal of the game including a 49-yarder.

This is the 15th year of the MAC Championship game.  Before the game a youth football fest will take place in connection with NCAA Youth Football and the Detroit Police Athletic League.

Huskie Happenings:
Northern Illinois Athletics is offering a Huskie Fan Bus Package for supporters interested in traveling to Detroit.  The package is $200 and includes a ticket to the game, admission to the HASF/NIU Alumni Association Tailgate event and round-trip transportation from DeKalb and Oakbrook Center to Detroit.  The Huskie Fan Bus departs DeKalb from the Convocation Center (Lot C3) at 7:30 a.m. C.S.T. and from outside Macy\'s at Oakbrook Center at 8:15 a.m. C.S.T.  The bus will arrive in Detroit at 4:15 p.m. E.T. and the HASF/NIU Alumni Association Tailgate will be from 4:30-6:30 p.m. E.T. with the program beginning at 5:45 p.m.