Polish-American Night and MLB are a Big Hit 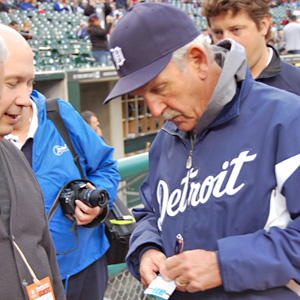 Manager Jim Leyland of the Detroit Tiger\'s signs an autograph for Fr. Walter Ptak of the PRCUA at the recent Polish-American Night at Comerica Park in Detroit. Photo courtesy of Rolco Sports Network.

Major League Baseball is really getting into theme nights. It is an added value marketing draw. In Detroit and Chicago, Pepsi has been at the forefront of a marketing partnership with baseball and the Polish-American community.

In Detroit recently, ‘Paws’, was a highlight as he entertained the announced crowd of 34,046 on a misty evening at the ballpark.  The animated mascot of the Detroit Tiger’s was dressed in colorful Polish folk-wear.  It was just one of the highlights as young and old approached to touch and talk with the popular cheerleader.  The color, music and dancing were all part of the pre-game festivities for the 41st annual Polish American Night at Comerica Park.

For those in attendance, besides the anticipated baseball action, and the spectacular color display from the dancing troupes, there was the added value of post game fireworks sponsored by Pepsi.  Pre-game music was provided by: The Natural Tones, The Kielbasa Kings and Big Daddy Lackowski & The La De Das.

A special promotion was sponsored by the Polish Roman Catholic Union and the Michigan Division of the Polish American Congress.  Those that purchased a special ticket package received tee-shirts with “Who’s your Tiger” in Polish on the back, (Twoj Ulubiony, TIGER?).

Before the game, Detroit Tiger’s manager, Jim Leyand, graciously took time to acknowledge those on the field supporting the pre- game festivities.  Leyland spoke with former baseball sensation Pinky Deras before the game.  Deras is one of the 2011 inductees into the National Polish-American Sports Hall of Fame and was acknowledged on the field.  The game was telecast to Boston and regionally thru Fox Sports-Detroit.

Before Rob Szczublewski of Toledo, Ohio did great service to the Polish and American national anthems the dancing troupes were center stage throughout the field of play.  At the appointed time pre-game emcee Rob Wolchek decreed, “Play ball.”

The evening started with great expectations and high hopes by having ace pitcher Rick Porcello on the mound for the Tiger’s.  The Boston Red Sox had a five run third inning that sent the Tiger starter to the showers and dimmed some of the evenings merriment.  Leyland said after the game, “He was just out of sync.”  Tiger rookie Charlie Furbush was a highlight with five innings of shutout relief.  With the home team losing 6-3, the post game Polka concert left most departing the stadium in good spirits.

Veteran talk-radio host Ron Cameron along with good friend George Eichorn saluted Ed Browalski.  Browalski was one of the driving forces of Polish-American Night and he headlined the formation of the NPASHF.

“Big Ed”, as he was affectionately known, was a respected baseball and bowling writer.  He was also the longtime official scorekeeper for the Detroit Tigers.  Veteran pro-wresting ambassador Kurt Schneider told humorous Browalski tales about how the players would lobby to get an error erased from the stats.

In keeping with the theme, the press box kitchen at Comerica Park featured a Polish style dinner and snacks.  Polish ‘Angel-Wing’ cookies (Chrusciki) were even featured.  “These are awesome,” exclaimed radio stringer Rich Curbelo, as he enjoyed the tasty confections.

Deras, who was signed by the St. Louis Cardinals out of Hamtramck High School for a big bonus, told Jim Conrad, “At my first day of spring training in St. Petersburg, Stan Musial came up to me and said, ‘Come on Polish boy, how about some catch.’”

“That shook off the butterflies,” added Deras.  “What a class act to help out a rookie like that.”  Musial was the first NPASHF inductee in 1973.

Editors Note: Raymond Rolak was a past Chairman of the NPASHF