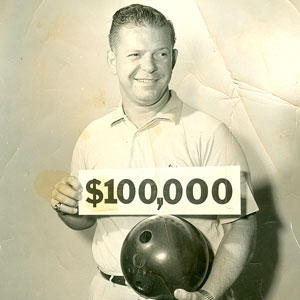 Champion bowler and Detroit native son Eddie Lubanski bowled at Thunderbird Lanes (Allen Park, MI) in 1962, but had his greatest day in Miami in 1959. The FIU and Toledo football teams got to bowl at the historic Thunderbird Lanes as part of their Little

Champion bowler and Detroit native son Eddie Lubanski bowled at Thunderbird Lanes (Allen Park, MI) in 1962, but had his greatest day in Miami in 1959...

From the Little Caesars Pizza Bowl in Detroit

The teams arrived in Detroit.  The Florida International University football team is staying at a nice older and reconditioned hotel.  Toledo got the Major League hotel. I am also staying at the upscale and high end Motor City Hotel and Casino.  I wonder if they flipped a coin.  Both teams got a walk thru at Ford Field.  It is the home of the Detroit Lions of the NFL.  It is a newer domed stadium and they held a Super Bowl there two years ago.

The players bowled at the Bowl, (American ten pins).  Yes they are bowling at the Bowl, [sic] pretty cool, huh?  There was mingling with the opponents.  Trash talk was included, but politely.  Everyone seemed to have a great time and they ate a lot of Pizza-Pizza.  It is amazing how much the players eat.  An army truly does travel on its stomach.  The VIP’s from both travel parties had a shi-shi reception at the historic Fox Theater, and saw the Broadway style musical, ‘Dream Girls’.

I learned that Thunderbird Lanes (Allen Park, MI), the bowling arena that the football players participated was historical.  It had a Miami connection and it was the arena that hosted professional team pro bowling in 1962.  It is an amazing place and yes, it is an arena and has arcades and a discotheque.  It was the bowling "home field" of the recently passed Eddie Lubanski.  Lubanski, a Polish-American was a champion bowler who had back-to-back 300 perfect games in Miami in 1959.  What was more amazing is that it was caught on film during a live television broadcast at Miami\'s Bowling Palace.

The Golden Panthers have rebounded after starting the season 0 – 4.  They had a tough pre Sun Belt Conference schedule.  Winning 4 of their last 5 gives FIU some momentum.  They had an impressive 52 -35 win over their Sun Belt Co-Champions, Troy University. Toledo ended up, 8-4.  The Rockets had an impressive win over Purdue of the Big Ten, 31-20.

There is so much to see and do... off to the Hard Rock Café and later the Hockeytown Café.  Also, near the stadium is Cheli’s Chilli owned by a prominent former Detroit Red Wing (professional ice hockey player).