"Do You Wan't To Play Some Football Under The Lights" 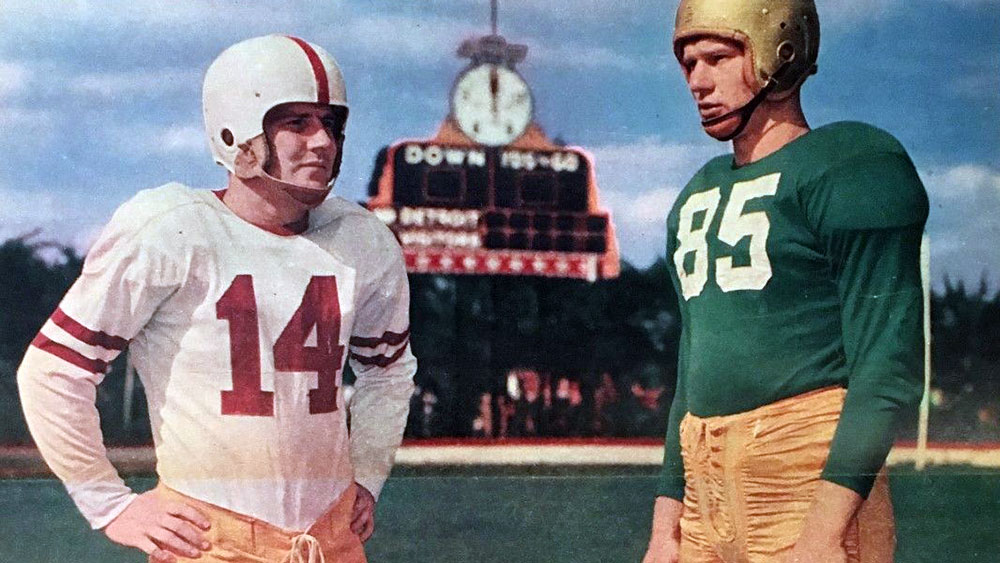 University of Detroit Mercy Athletic History. DATELINE DETROIT… OCTOBER 5, 1951. Under the cool, night skies of a crisp October evening in the year of 1951, a bus load of Fightin’ Irishmen from Notre Dame pulled into Briggs Stadium at “The Corner” of Michigan and Trumbull Avenue. Their mission… to do battle with Detroit’s fightin’ Titans on the “Field of Dreams.” The lights at the historic stadium lit up the night sky over downtown Detroit seducing the “birds of a feather” into believing it was time to get up and go hunt worms again. The lights were also on in the old row houses in Detroit’s nearby Irish neighborhood, “Corktown.” Even the kids were up late, hoping to catch glimpse of their hard-hitting heroes…. those tough and tumble, ready to rumble, hard scrabble footballers, about to do battle on the gridiron before 52,000 “standing room only” spectators, fans and other assorted onlookers.

Preparations were done and the unavoidable battle… about to begin.  It would be the first ever night game in the Notre Dame’s Fightin’ Irish’s long and legendary “Win one for the Gipper” history.  Head Coach Frank Leahy's young Irish team brought to Detroit the glare of National media and a ton of talented players.  But, when all was said and all was done, and the “hype” went down with the setting Sun, the game would be won…  or lost, down on the field of play, by the helmeted marionettes who stood at bay, as they mumbled the words, “Oh, say…. can you see.”  The illuminating brilliance of Briggs Stadium’s artificial light towers lit up the surrounding, Corktown neighborhood.  But, the athletic brilliance and the flashing cleats of Notre Dame’s senior halfback, Johnny Petitbon, lit up the entire town…. up and down, Michigan Avenue. 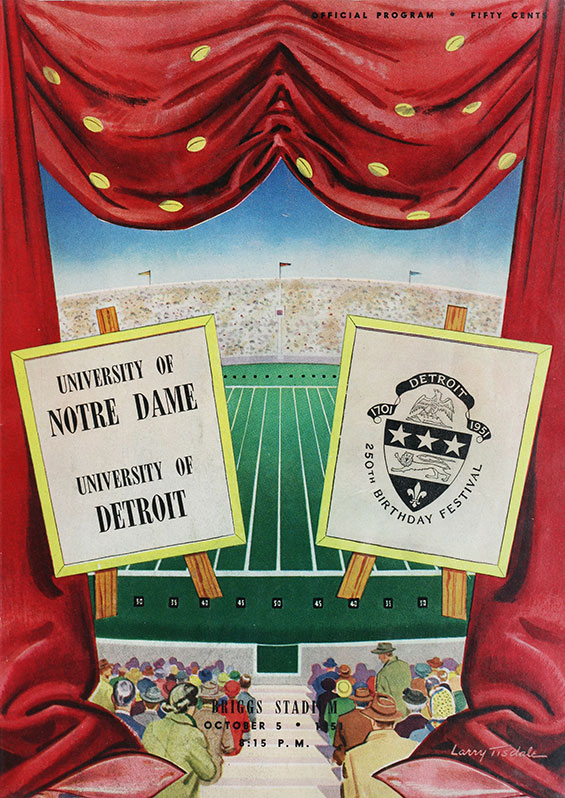 The ref blew the whistle.  The foot hit the ball and the kickoff flew into the night sky.  But, before the fans even took their first swig of Tullamore Dew Irish whiskey, Notre Dame’s Johnny Petitbon took the opening kickoff back 85 yards.  Streaking left, darting right and then accelerating “long gone” as bone crushing blocks reverberated throughout the stadium’s steel structure.  Bam, smack, crash, pow.  WOW!!!  What did we just see???  Pass the flask.  The game is on.

But, Johnny Petitbon was far from done.  A few minutes later, Billy Barrett fielded a punt for the Irish, darted to his right, and, at full speed, handed off the football to a crisscrossing Petitbon who converted that razzle-dazzle punt return into a 73 yard run to the house for another six points.  Johnny “catch me if you can” Petitbon finished up the first quarter with a quick pitch right from quarterback Johnny Mazur, and accelerated around the Titan’s flank for a 39 yard “takin’ it to the house again” third touchdown…. less than 15 minutes into the game. 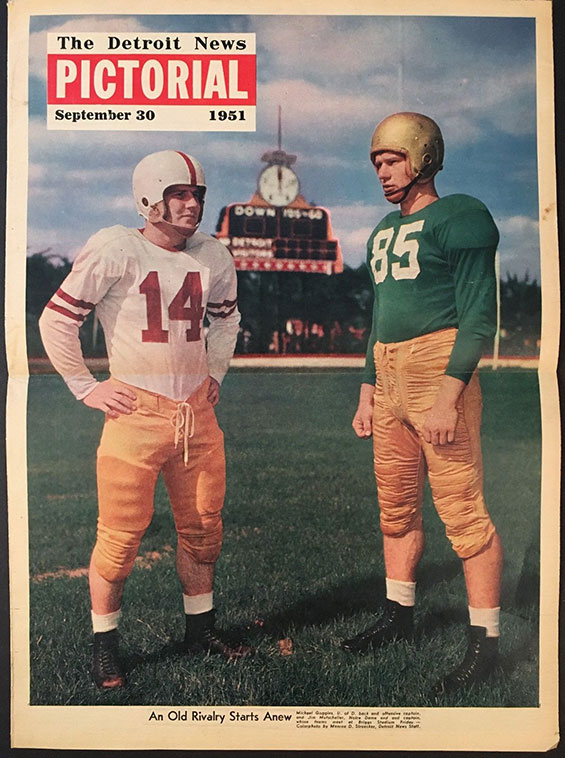 Overheard was a voice of a Paddy Moriarity with his distinct, Irish lilt, “I’ll be needing another wee sip of the Irish spirits, just to adjust me eyes to the brilliance of that Petitbon kid’s exploits.”  “Bottom’s up… ladies.”  And, no doubt, Moriarity was right on the money, as indeed Notre Dame scored again at the end of the half with quarterback Johnny Mazur’s tight-spiral finding tight end, Jim Mutscheller, with a 30 yard T.D. toss to put the Irish ahead at the half, 26 to 0.  So this is the game the nationally prominent teams play.  Size and speed and speed and size and more speed, speed, speed!!!  That Johnny Petitbon was so fast that when he turned the lights out in his dorm room at Notre Dame, he got under the covers and fell asleep before the room got dark.  Man, that’s world class speed… move over Jessie Owens.  We got a new kid on the block… Johnny “the Notre Dame Flash” Petitbon. 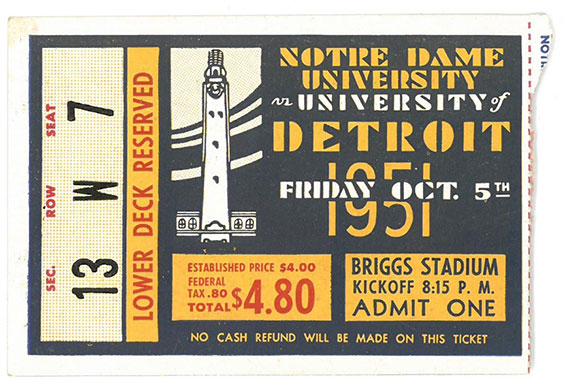 Detroit's first year head Coach, Dutch Clark, himself a College and NFL Hall of Famer, motivated his young squad at halftime, as Detroit’s beleaguered Titans refused to quit and came back into the second half of play with plenty of emotional “never say die” fire and zip.  The Detroit Titan defense was especially strong in the second half, as they shut down two Irish scoring bids to hold visiting Notre Dame scoreless in the third period.  The Titans even managed a score of their own on a 50-yard touchdown march, with Detroit halfback, Bob Lippe, exploding through Notre Dame’s goal line defense with a one yard plunge… physically earning every bit of that one yard smash and crash to pay dirt.  The Titans first extra-point try was good, but a 15 yard penalty nullified the extra point with the next kick falling short.  But, Notre Dame wasn’t through yet.

Future Heisman Trophy winner, Johnny Lattner, intercepted a pass from Titan quarterback Ed Gornak and ran it back 32 yards for a touchdown.  Later, Notre Dame Freshman, Walt Cabral, pounced on a Detroit fumble on the Titan 18-yard line setting up the final Notre Dame tally as Irish halfback, Paul Reynolds, ripped his way to the four, and then to the one.  Irish freshman quarterback, Ralph, Guglielmi, took over and went the final yard on a quarterback sneak.  Menil Mavraides (affectionately known in South Bend, Indiana as Mr M&M) kicked the extra point, and the long expected showdown came to an end… the Fightin’ Irish of Notre Dame 40, the Detroit Titans 6.

The Irish out gained their Detroit hosts in total yardage, piling up 402 yards with 284 yards on the ground and 118 yards in the air.  Not counting his opening kickoff return of 85 yards and his razzle dazzle, crisscross punt return of 73 yards, Notre Dame’s Johnny “the Flash” Petitbon finished off the evening with 130 yards from the line of scrimmage, on 13 carries.  Testament to the ferocious collisions between ball carriers and tacklers, there were nine fumbles.  Every fumble was lost, as the Titans scooped up five Notre Dame fumbles while the Irish recovered four of the Titan’s ball handling miscues.

Though the loss on the gridiron was a short term disappointment to Detroit Titan fans, the Notre Dame--University of Detroit clash of Titans was a long term success that helped “brand” the University of Detroit’s athletic program in the national consciousness.  Putting this epic Fightin’ Irish, Fightin’ Titan showdown together demanded a ton of effort and required the work of many.… many dignitaries, luminaries, everyday Detroiters, sportsmen and sportswomen coming together.  This including many WW II vets and war heroes, all mobilizing their “can-do” spirit with great teamwork and camaraderie to make this “standing room only” clash of the Detroit Titans and the legendary Notre Dame, Fightin’ Irish… the “Event of 1951”!  It is still remembered seven decades and 68 years later.  It was a day and age when the word “America” stood for cooperation and working together with a common spirit, for a common cause, and the game required numerous contractual commitments, leases, transportation agreements, financial documents, revenue sharing agreements and special waivers to make the “what if ???” become a “We did it.”

The President of the University of Detroit (now Detroit Mercy), the Rev. Celestin Steiner, S.J. (1889-1971) a revered Jesuit and a tenacious University of Detroit football player from the 1920s along with his counterpart, the President of Notre Dame and resident Irishman, Rev. John J. Cavanaugh, fully supported this historic night of “knock down, drag out” football as did Walter O. Briggs, the owner of the Detroit Tigers Baseball Club and a well loved Ambassador for the City of Detroit.

Tons of appreciation to those mentioned and to those unmentioned and to many foot soldiers… the known, the barely known, the unknown, the remembered, the forgotten and the never known, for their gracious contribution to the University of Detroit, Notre Dame football game of October 5, 1951, during the 250 year celebration of the founding of the City of Detroit. The effort of all provided Detroit with an historic night, still vividly remembered 68 years later.  That football show, that “Event of 1951” showcased and highlighted Motown’s “Sports Town” mentality, in all its impressive, “never-say-die” grandeur.

The 1951 University of Detroit, Notre Dame football contest was not the first competition between the two schools.  They met once before during the roaring twenties in 1927 at Dinan Stadium on the (then) new grounds of the University of Detroit.… McNichols’ campus.  That game also saw an over-flowing crowd of over 30,000 fans.   30,000 fans who walked or drove to the game on a then “unpaved” McNichols Rd. (aka Six Mile).  Notre Dame prevailed in that contest, 20-0.  Notre Dame’s immortal Coach, Knute Rockne, coached the Fightin’ Irish in that 1927 game while Gus Dorais…. coached the Fightin’ Titans.  Ironically, Rockne (an End) and Dorais (a Quarterback) were Notre Dame teammates in 1913 when they were credited with “inventing” the forward pass and shocking a highly touted, undefeated, Army team from West Point…. 35 to 13.

In 1928, one year after Notre Dame met the Fightin’ Titans for the first time, the Fightin’ Titans, under Coach Gus Dorias and led by All American half back, Lloyd Brazil, went undefeated and untied, on their way to a spectacular 9-0 season shutting out 7 of their opponents.  They were called the “Powers of the Midwest” by famed sportswriter, Grantland Rice.  The Detroit Titans were voted the mythical National Championship team of 1928.

There is a special plaque dedicated to Gus Dorais (1892-1954) at the entrance of Calihan Hall by the ticket office.  It is a Titan testament of the ages. Gus Dorais’ was the longest tenured head, football Coach in the Detroit Titan’s history.  His vision, dedication, loyalty, energy, courage and commitment led to National prominence and steady growth for the University of Detroit, now known as the University of Detroit Mercy.

The exemplar of a “Jesuit” educational, academic excellence, athletic tradition and a legacy dedicated to greatness in all things, large and small, continue today with the growth, development.

The steady, uphill progress of the Titan basketball program with its star student-athlete extraordinaire, Antoine Davis is becoming a national story.  Antoine Davis had about as good a freshman year as you could have…. Freshman-of-the-Year in the Horizon League, Freshman All American team, broke Seth Curry’s three point record for freshmen and third leading scorer in the Nation averaging 26.1 points per game.

There are still great academic and athletic exploits left for the University of Detroit Mercy. It starts at the top with President, Antoine Garibaldi, Director of Athletics, Robert Vowels, and head basketball Coach, Mike Davis, father of Antione Davis.

Hey, when do we get a shot at Notre Dame’s basketball team???  Bring it on!!!