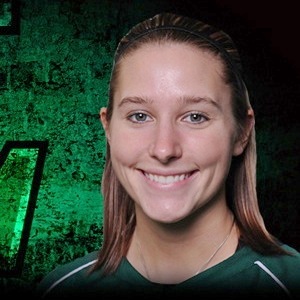 CLEVELAND —  Katy Blaharski of the Eastern Michigan University softball team was named to the 2012 Academic All-MAC team.  She was the lone Eagle to earn the conference award.

The Academic All-MAC honor is for a student-athlete who has excelled in athletics and academics.  To qualify, a student-athlete must have at least a 3.20 cumulative GPA and have participated in at least 50 percent of the contests for that particular sport.  First-year students and junior college transfers in their first year of residence are not eligible for the award.

Blaharski is an Exercise Science major who boasts a 3.93 grade point average. The junior outfielder hit .319 (23-of-72) in MAC contests with six multi-hit games. She put together a 10-game hit streak in MAC games from April 13 through April 29 and scored 12 runs and had 8 RBI with a .389 slugging percentage.  Blaharski knocked in a career-best four RBI against Buffalo on March 30.  She struck out just seven times in 72 at bats and was flawless defensively on 18 chances in center field.  The Carlton High School graduate played in 24 games, starting 22 times in center field.

Junior pitcher Jenna Ignowski was an Academic All-MAC selection last year.  This year she was 11-11 in 33 games on the mound.  The Niles High School product finished with a 3.90 ERA.