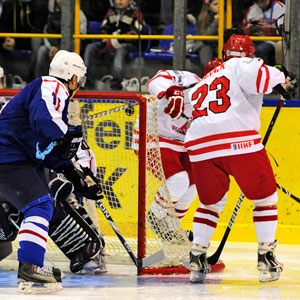 Korea shocked host team Poland with a 3-2 win in the 2012 International Ice Hockey Federation Division I Group B, tournament. Korea had a third period flurry and kept the offensive pressure on until the finish. Korea will now be promoted to the Division-I, Group A for next year.

KRYNICA - Korea got to the gold medal game with a 4-3 overtime win over the Netherlands.  In the championship match, Hyung Joon Kim scored the winner at the packed Krynica Ice Stadium early in the third period. Korea silenced the home crowd as they had rallied back from two goals down.

"I am proud of my players. My players are not big or strong, but they are good skaters and have a big hearts" - said Hee Woo Kim, Korea’s assistant coach.

"Today everybody won this game for us as a team, and that is the important point.”

Poland was the considered favorite as they had a hot scoring touch throughout most of the tournament. Going in to the final game, both teams were still undefeated and each side knew that a win would mean promotion to the Division I Group A.  Poland scored first with a goal from defenseman Jerzy Gabrys on a pass from Leszek Laszkiewicz. Laszkiewicz also set up Poland’s second tally when he took a Patryk Wajda pass from behind the net and fed Piotr Sarnik, who scored.

Poland continued to press and got a great chance to extend their lead when Tomasz Malasinski got a break away coming out of the penalty box and was one-on-one with Hyunseung Eum.  Eum made a great save to keep Korea in the game.

Spokesperson for the Polish team, Patryk Rokicki said:
"Of course we are disappointed, in my opinion the most important moment of this game was the chance of Tomasz Malasinski. The momentum slipped away after that."

Polish head coach Wiktor Pysz added:
"I knew that this would be the deciding game and we played a good tactical game where we tried to block the play in the neutral zone to avoid Korea gaining speed.”

The Netherlands got the bronze medal with a 7-1 victory over Lithuania.