President of Belarus Under Fire 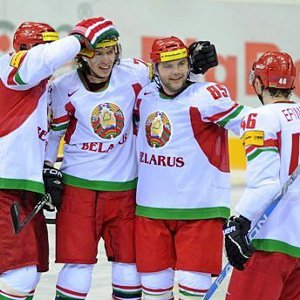 BRUSSELS--  In two years time, Belarus is scheduled to host the World International Ice Hockey Federation Championships.  Belarusian President Alexander Lukashenko is not happy that some in Europe are bantering to pull the event from Minsk.

The Belarusian president, now 57, loves hockey and has green-lighted a program to accelerate the building of many indoor rinks throughout the country.  He is an avid player still and hosts an up-scale tournament.  He is also active in affairs regarding the Belarusian Ice Hockey Federation, very hands on, one would say.

European Union lawmakers asked the IIHF to punish Belarus if the regime of Lukashenko refuses to release political prisoners.  Also newly imposed media restrictions have surfaced throughout the country.

At the forefront of the protests are European Parliament members Marek Migalski of Poland and former Slovak and NHL hockey star Peter Stastny.  They have also organized an internet signature campaign to move the 2014 championships out of Belarus.

Stastny is now trying to have one of the 70 IIHF Congress delegates -- consisting of the presidents of all the national ice hockey federations – to put the question on the agenda at their meeting in Helsinki, Finland in May.  He hopes that a majority will endorse the change of venue.

Referring to Lukashenko, Stastny said, “I know he is an avid hockey fan, he enjoys (it), and he is passionate.  He plays hockey two or three times a week.  It just hit me that if you touch upon somebody’s hobby and passion, you might just get good results, he might react and he might kind of open up gradually.  You know the only condition is to release immediately those political prisoners.”

Stastny, who can speak Slovak, French and English fluently, concluded with, “To get to organize such an important event, it’s a matter of privilege, a matter of being rewarded.  What is Belarus and the Belarussian regime right now being rewarded for?  That is the question that bothers me.”

“The only thing which can force Lukashenko to change his internal policy is a boycott of the Ice Hockey World Championship,” said Austrian European Parliament member Hannes Swoboda.  He added, “It’s the only leverage because it is a very important event for the Belarusian president personally.”

Recently, Lukashenko appeared on Russian-English television (RTV Network).  The Rolco Sports Network obtained the transcript of the hockey portion of the interview.

RTV-  Right now, could we start with ice hockey?  Even though you’re personally involved in this, you’re an avid hockey fan, and you give a lot of your time to hockey, Dinamo-Minsk’s performance in the KHL has been very poor.  It lost to Dinamo-Moscow, the team I support, so I am happy, but at the same time I feel sorry for your team.  Why did that happen?  And what are your prospects?  The World Championship is not too far away, after all.

LUKASHENKO-  I don’t know why you mentioned me at the beginning (interview) because I don’t play for Dinamo-Minsk.  Had I played for them, they might have won.  I’m joking, of course.  First, objectively speaking, this is only the third year that our team has been playing at such a high level.  And it is the second time we\'ve made it into the playoffs.  This is not bad at all.  Second, we expected to go much further this year but I think the managers of our team made some mistakes when planning the season.  They reached peak form during the first half of the season, when we defeated Dinamo-Moscow twice, and won many other games, and were ranked first in our division.  But then we lost the momentum in the playoffs.  You can’t possibly stay in your top form throughout the season. You need to be able to time the peak of your form…..

RTV-  So it was a planning mistake?

LUKASHENKO-  Yes.  Timing the peak of the form is what Dinamo-Moscow did, as well as other teams that had lost to Dinamo-Minsk before that.  We had beaten them before, but they managed to time the peak of their form to the most important game.  I think this is the key reason.

LUKASHENKO-  Well, I don’t think there should be any surprises there, although surprises are inherent in sports.  They can happen at any time.  However, we are not planning any surprises deliberately; neither are we planning to leave the elite of world hockey.

RTV-  Mr. Lukashenko, the 2014 World Hockey Cup will be hosted in Belarus.  There have been rumors, actually, about some plans to take the right to host the Championship away from Belarus and give it to another country.  What do you think of those rumors?  Is there any substance behind them, or are they just gossip?

LUKASHENKO-  I heard that talk.  It’s nothing more than talk.  This is a purely political process that has nothing to do with sports.  If it happens, it will be a blow to the reputation of the Hockey Federation at least, or to world sports in general at most.  After all, Belarus has deserved and earned this World Championship, and we have done a great deal in preparations for it.  I am sure that if this Championship in Minsk takes place, all journalists will say that they saw nothing like that before.  You said we have been very hospitable and friendly during this meeting; the entire country is going to be just as hospitable and friendly when hosting the Hockey Championship.

RTV-  So there are some surprises in the pipeline, I can feel that.

LUKASHENKO-  Well, this is where God tells us to do our best.

In other developments regarding the controversy to remove Belarus from hosting the 2014 world championships, an official of the Ice Hockey Federation of Russia weighed in.  Valery Fesyuk, executive director of the federation said his group won’t support the European Parliament’s resolution calling on the International Ice Hockey Federation to keep the championships out of Belarus.

Fesyuk said, “The IIHF is one family.  We are involved in sport.  And sport, as everyone knows, is outside politics.  If a misunderstanding occurs with one of the members of our family, then we will take a stand to defend him.”

In a rebuttal statement on the radio, Stanislau Shushkevich, the first leader of an independent Belarus, says he supports moving the 2014 ice hockey world championships away from Belarus.  Shushkevich said a precedent for the move already exists -- the 1969 championship scheduled in Prague that was moved to Stockholm in response to the 1968 Soviet crackdown on the Prague Spring reform movement.

Last year, when he was Chairman of European Parliament, former Prime Minsiter of Poland, Jerzy Buzek, with the support of fellow MPs called on the IIHF to move the World Hockey Championship from Belarus to another country.

(An excerpt)-- “For two decades, Belarus has been ruled by the brutal and undemocratic regime of Lukashenko. EU and the United States strongly condemn the actions of Lukashenko.  This regime has arrested hundreds of peaceful demonstrators, including presidential candidates, the opposition leaders, journalists, civil society and ordinary citizens of Belarus.  The Ice Hockey Championship in 2014 cannot be held in Belarus in such terrible conditions,” stated Buzek’s letter.

It must be noted that when the Polish delegation was asked to leave Belarus.  Mark Toner, deputy spokesperson for the U. S. State Department issued the following statement.  “The United States notes with deep regret the Government of Belarus’ decision to request that the EU Head of Delegation and Polish Ambassador to Belarus return to their capitals for consultations, while simultaneously recalling its Permanent Representative in Brussels and Ambassador in Warsaw.  These actions, like the expulsion of the U.S. Ambassador to Belarus in 2008 and the closure of the OSCE Office in Minsk in March 2011, are only deepening Belarus’ self-isolation.  The United States takes note of High Representative Catherine Ashton’s statement today, which announced that ambassadors of all the EU Member States in Minsk will be withdrawn for consultations to their capitals, in an expression of solidarity and unity.  The United States stands with our partners and joins them in calling on Belarus to end its repression of civil society and the democratic opposition.”

Recently the IIHF followed with this written statement:

IIHF communications director Szymon Szemberg recently told me that the question about moving the 2014 championship from Belarus may be included into the agenda of the May IIHF congress.  The IIHF issued the following written statement:

“On May 8, 2009, the IIHF Congress – the legislative body of the International Ice Hockey Federation – awarded the 2014 IIHF World Championship to the Belarus Ice Hockey Association in accordance with the IIHF Statutes and Bylaws.  Paragraph #7 of the IIHF Statues state: The IIHF observes strict political, racial and religious neutrality.  No discrimination is permitted against a member national association or person on political, racial or religious grounds.

The next congress will be in Helsinki, Finland in May, 2012.  Any of the 70 IIHF members, including the IIHF Council (the IIHF’s Executive Body) will have an opportunity to raise the issue of whether it is appropriate to play in Belarus.  And, if the issue of Belarus 2014 will be raised, it will be up to the congress to make a decision.  The IIHF would furthermore like to invite to a broader discussion whether it is recommended to generally use sports as a political tool and – if, yes – how to implement across-the-board consistency in such actions to avoid that certain sports and championships are arbitrarily singled out.”

In an interesting footnote, Olympic figure skating champion Evan Lysacek just went to Belarus to put on some clinics.  He was sponsored by the U.S. State Department.  Sports emissaries can be a great catalyst for diplomatic healing.  Lysacek stopped in Sweden and met with the U.S. Ambassador to Sweden, Mark F. Brezinski and his wife before continuing to Minsk.