National Stadium in Warsaw to Host Super Final-VII of PLAF 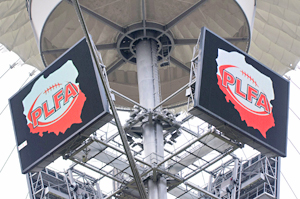 The return of spring weather also signifies the start of American football in Poland. The 2012 season is kicking off this week in Warsaw. There will be five divisions this year with the championship culminating on July 15, at the National Stadium in Warsaw.

That game will feature the best two teams from the new Top-League.  Six teams will compete in the top division of Polish League of American Football (PLFA).  The reorganization for 2012 included the name change at a recent announcement. The name change was presented at a kick-off press conference at the National Stadium.

“Playing the Super Final at the National Stadium will be the next breakthrough for the League, after last year’s televised final,” said PLFA Commissioner Jędrzej Stęszewski.  “The success of this event will bring football in Poland to the next level.  Organizing Super Final VII in the most modern stadium in Europe is going to be a challenge, but I believe it will be one that we can meet successfully.”

Overall, the 2012 PLFA season will see 27 teams from 21 cities compete in three senior divisions of 11-man football, but it is the Top League that will dominate the headlines between March and June.  The Top League will break only for Easter weekend, the Polish May holiday and a bye week in late May.

The season opener will see Kozły Poznań visit the Warsaw Eagles. Those two teams will join the Wrocław Devils, Krakow Tigers, Gdynia Seahawks and Silesia Rebels in Top League play this season.  The Rebels team arose from a merger between the Silesia Miners and the Ruda Śląska Warriors.  In addition, the second-oldest team in Poland, the KFA Fireballs, joined forces with Kozły, and the new team formed by that merger will play under the latter’s title.

Teams in the Top League will play two games against each of the other five teams in the league. The four best teams at season’s end will advance to the semifinals, planned for the weekend of June 30-July 1.  The winners will then advance to the ultimate game of the season, PLFA Super Final VII, to be played on Sunday, July 15.  Last year’s Super Final VI, which was played in Bielawa in Lower Silesia, was the first Polish game shown live on television.  The TV broadcast was seen on over-air Sportklub and on the Internet through ipla.tv.

The Wrocław Crew (now renamed the Giants) won their second national championship, besting cross-town rival, the Devils.  This year the Giants are competing in the EFAF Cup (the football equivalent of soccer’s Europa League) and in the Czech national league.  That leaves the Devils and the Eagles as the favorites to take the crown heading into the new season, with the retooled Seahawks expected to follow close behind.

Just as in other European sports league models, after the season, the PLFA Division II champions will be promoted to the Top-League and the last place Top-League team is relegated to Division II.