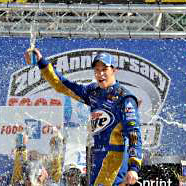 Brad Keselowski, driver of the Penske Racing No. 2 Miller Lite Dodge Charger in the NASCAR Sprint Cup Series, scored his first win of the 2012 season in the Food City 500 at Bristol Motor Speedway on Sunday afternoon. Keselowski led a total of 232 laps – as he scored his second consecutive victory at Bristol which is in Tennessee.

Keselowski in his second season driving for Penske again was front and center by ‘Twittering’ during breaks in the action.  Keselowski held off Daytona 500 winner Matt Kenseth on a late restart en route to his first win of the season.

“What can I say? I love Bristol and Bristol loves me,” said Keselowski, who immediately began taking pictures in Victory Lane to send to Twitter.  “The goal at Penske Racing is to win a Sprint Cup championship, and one win certainly doesn\'t achieve that, but it’s a great step.”

Keselowski began the 500-lap event from the fifth position based on his qualifying lap of 124.865 miles per hour, during the Friday afternoon qualifying session.  The Miller Lite Dodge took several laps to come alive and, as a result, Keselowski dropped two spots at the start.  When the handling condition on the “Blue Deuce” came around to Keselowski’s liking, the Rochester Hills, MI., native began turning some of the fastest laps on the track.  Keselowski avoided disaster at lap 24 as two competitors immediately in front of the Miller Lite machine made contact, setting off an incident that took out several contending cars.  Keselowski was able to escape with only minor damage to the nose of the car, which was repaired during the caution period.
Keselowski restarted the race from the 10th position at lap 47; following a lengthy clean up from the incident.

“This Miller Lite Dodge here (is) a brand new car that Penske Racing built – everybody back in the shop did a phenomenal job,” said Keselowski.