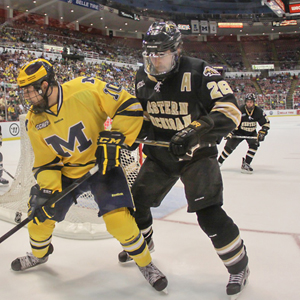 Western Michigan University jumped out to a 3-0 lead and freshman goalie Frank Slubowski held on to the lead as the Bronco’s won the 2012 Central Collegiate Hockey Association tournament championship at Joe Louis Arena. The 3-2 win over Michigan also meant an automatic NCAA bid. A late Michigan rally came up short.

WMU beat Michigan 3-2 for the 2012 title and both teams advanced to the NCAA playoffs.

DETROIT - Slubowski appearing in his 31 game for Western (21-12-4) was tournament MVP.  The 20 year old from western Canada (Prince Rupert, B.C.) finished with 27 saves.  Opposing net minder Shawn Hunwick made 22 saves for the Wolverines.

Western’s first line of Chase Balisy, Dane Walters and Shane Berschbach was the difference for the Bronco’s.  They combined for two WMU goals, one from Walters and one from Balisy.  Sophomore defenseman Luke Witkowski was steady on the blue line and senior captain Ian Slater got the first tally for the Bronco’s at 13:26 of the first period.

- "Pretty tough to talk after something like that" - WMU head coach Andy Murray said post game - "I’m just so happy for our players. This is all about them. It’s all about their commitment. All year they worked extremely hard."

Murray who is in his first year at WMU has previously coached in the NHL, in Europe and for Team Canada.

The announced crowd was 10,421.  An added-value activity was the CCHA Fan Fest at the GM Winter Garden at the Ren-Cen.

It was announced that the CCHA has placed five teams in the NCAA Division I Men’s Ice Hockey Championship for the second time in league history and will be represented at three of the four regional sites.

CCHA Tournament runner-up Michigan and Regular Season Champion Ferris State are headed to the Midwest Regional at Green Bay, Wisconsin.  Miami and Michigan State will travel to Bridgeport, Conn. for the East Regional and CCHA Champion Western Michigan will play in the West Regional at St. Paul, Minn.

The four regional winners advance to the Men’s Frozen Four in Tampa, Florida, on April 5-7.

The International Ice Hockey Federation (Division-I Group-B) Tournament will take place in Krynica, Poland April 15-21.  National Teams from Australia, Korea, Lithuania, Netherlands, Romania and Poland will be participating.  Currently, Poland ranks 23 out of 48 men’s IIHF National Teams.  This is the first season that Poland has entered a women’s ice hockey National Team in international play and will become eligible in the world rankings after this season.