Gronkowski - The Talk of Indy 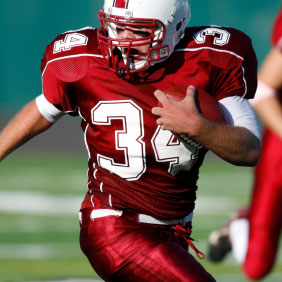 The New York Giants have a strong defensive but no one in the NFL had an answer for the 6’6” blocking-receiver. Gronkowski, who set single-season records for scoring and receiving yards by a tight end this season, is a big part of the Patriots offensive game plan. He had 17 touchdowns among his 90 receptions this season.

By Raymond Rolak
INDIANAPOLIS - As the Delta Airlines charter flight came to a stop the captain flew a Patriots flag from the window as he feathered the engines down.  When the plane door popped open and the New England Patriots started to walk down the mobile staircase they were greeted with welcome scarves from the Super Bowl Host Committee.
The real story was when those watching near the tarmac strained to look toward Rob Gronkowski and his ankle.  Gronkowski will be the topic of Super Bowl XLVI parties and sports-talk radio right up through kickoff time.  The super tight end is the favorite reception target for the New England Patriots quarterback Tom Brady.
The New York Giants have a strong defensive but no one in the NFL had an answer for the 6’6” blocking-receiver.  Gronkowski, who set single-season records for scoring and receiving yards by a tight end this season, is a big part of the Patriots offensive game plan.  He had 17 touchdowns among his 90 receptions this season.
He has reinvented the position as a safety valve for his celebrated QB and most importantly, getting yards after the catch. With professional coaches and football speak it is called YAC.  YAC is a very valuable statistic in analyzing the aerial offense.
He suffered a high left ankle sprain in the AFC championship game against the Baltimore Ravens.  Gronkowski has been seen walking in a boot and has not participated in practices.  His father, Gordon, had the Patriots front office in a tizzy by releasing information announcing that his son has a high ankle sprain but expected to play.  Gordon Gronkowski told Buffalo television station WIVB the info during an interview much to the chagrin of NFL officials.  The reason being, gamblers thrive on that kind of inside information.
A high ankle sprain is an injury that can sideline a player.  If Gronkowski plays he might be limited in what he is able to do on the field.  He has been kept out of practice and has been seen walking in a protective boot.
The official word from the Patriots is that Gronkowski is day-to-day.  No one knows what that will mean but Gronkowski has told some reporters that he should be on the field next Sunday.  At press day and seated at a podium and without the walking boot he wore last week, Gronkowski didn’t seem overly concerned Tuesday that he would miss the Super Bowl game against the New York Giants as he said, “The game is six days away. I can be 100 percent by then or I can be 2 percent by then.  It’s day to day.”
The durable Gronkowski has played in all 35 games since the Patriots drafted him in the second round out of Arizona two years ago.  “You’ve got to prepare for every one of these situations that come up,” said Brady.  The Patriots also have Aaron Hernandez another capable tight end.
During Super Bowl Week at the popular photo-op event, the good natured Gronkowski added with a smile, “I’m improving every day.  The only reason it’s getting so blown up is because it’s the Super Bowl.  It’s just like any other injury during any other week.”
Something new this year at Super Bowl was that spectators could buy tickets to Media Day.  The NFL only allowed 7,300 and they sold out quickly.  Tickets were $25 apiece.
Each fan got a gift bag with a headset radio and they could tune in to whatever interviewed player or coach they wanted to listen in with.  Many players were taking their own home videos also and doing mock interviews.  “I am listening to Eli Manning right now,” said Indy native son Dinger Ernstes.  “It’s been really fun to tune in and listen to a lot of the coaches and being so close is great.” he added.
Jacek Urbaczyk
contributed