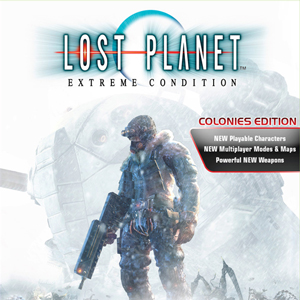 The Colonies edition is a great, cheap refresh which gamers new to Lost Planet might want to try out...

Lost Planet Colonies is not a sequel to the hit Lost Planet, but rather a very ambitious re-release for the PC and Xbox 360.

Our review of the bulk of the game\'s content can be found here.

Colonies\' new features mostly focus on revamping the game\'s slightly broken multiplayer, adding an impressive 12 new maps, new weapons and player models, and even 7 new gametypes, like Akrid Hunter. Stand-out modes include Egg Bandit, Akrid Egg Battle, VS Annihilator, and Akrid Hunter Mode, which makes 4 player Akrid and tasks the rest of the players in taking them down. This is another premiere title supporting cross-platform LIVE play, which is done nearly seamlessly.

The single-player additions aren\'t as impressive as the new multiplayer offerings, but they do offer some cool perspective options (first-person and over-the-shoulder viewpoints) or bonus modes based on existing content. Lost Planet Colonies is well worth seeking out for its refreshed online servers and distinct new play modes.

Final Score: 8.5 - The premiere version of Lost Planet, features some cool new multiplayer features that will appeal to fans of the original and newcomers.
Marcin Skok
Editor-in-Chief
"The Gaming Corner"