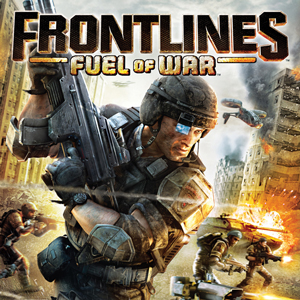 Frontlines is an admirable attempt to recreate Battlefield...

Frontlines is brainchild of Kaos Studios, creators of the Desert Combat Battlefield 1942 mod. But can Frontlines teach the genre a few new tricks or is it doomed to suffer in the shadow of its famous uncle?

FFOW depicts a conflict between two superpowers: the Western Coalition and Red Star Alliance. Multiplayer is heavily Battlefield-influenced with several exceptions and changes.


At the beginning of a map, players choose one of the two teams. Their objective then is to capture a series of capture points that make up a "frontline". When one team succeeds, the frontline is shifted towards the enemy team. This tug-of-war continues until one team dominates the map and wins the round.
Delving a bit deeper into the actual gameplay, FFOW introduces several novel mechanics. The different classes have access to a variety of drones. Some fly, some roll around, some detonate, etc. They are fun and surprisingly easy to control. The only catch is the fact that they have a limited signal strength, meaning you have to stay withing a certain range in order to be able to control them. This adds some strategy to the act, as you have to leave your character undefended while you\'re busy controlling your drone. These drones are what could make Frontlines feel unique and a bit fresh, even for Battlefield veterans.

Unfortunately, not all is up to par in the game. There is a good amount of variety in the classes and weapons, but there is one annoying, prevailing problem: the huge degree of inaccuracy with the weapons. On both the PC and 360 versions, the weapons have an uncomfortably large aiming reticle and firing radius like in Halo 2 or Shadowrun. It\'s uncomfortable engaging enemies at long distances with assault rifles as they\'re nowhere near as accurate as they are in the Battlefield or even Call of Duty series. There\'s also the fact that the weapons feel abnormally weak.

Vehicle driving is standard FPS fare, no special twists or anything.

Strangely, Frontlines comes with a single player campaign, detailing the two factions\' clash over the last oil reserves in the world sometime in the distant future. It takes larger versions of the multiplayer maps and adds bots to both sides in order to simulate a single player mission. It\'s a decent attempt, with cutscenes and good voice-acting, but definitely won\'t be winning any awards soon.

Like EVERY other game (well, nearly) FFOW is powered by Unreal Engine 3. And while it doesn\'t come close to Gears of War or Unreal Tournament 3, the game does look pretty decent. There\'s a limited amount of destructability in the environment, and the textures aren\'t half bad. All around, its a solid-looking game, but holds no real visual treats.

The sound is a mixed bag. Voice acting is decent in the average campaign, but the weapons give a feeling of "been there, done that."

A large problem with both versions is the large amount of bugs present in the game. On the PC, the game seems to pick and choose what machines it will run on without crashing. Out of the rigs we tested, about half of them had game-stopping problems while the rest had minor crash issues. The 360 version suffers from some extreme cases of online lag, even on the dedicated servers that THQ provided on LIVE.

Frontlines is an admirable attempt by a team shipping their first real, full length game. But it lacks the level of polish found in the Battlefield games.

Gameplay: 8 - A weird mix of standard Battlefield combat and tactics with new frontline ideas and controllable drones. Weapons are very faulty and inaccurate.
Presentation: 8 - Decent presentation of a future conflict, won\'t win any awards for its story...
Graphics: 8 - An admirable use of the Unreal 3 technology that manages to separate itself from the pack by presenting competently rendered outdoor environments
Sound: 8 - Ok voice acting for campaign, weapons and explosions sound a bit underwhelming.
Value: 8.5 - Multiplayer is fun to play at least for a short while.

Final Score: 8.1 - If you\'re a hardcore lover of the Battlefield style of gameplay, consider taking a look at Frontlines.