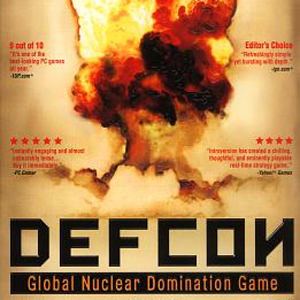 The trend in the gaming market has been a move towards more and more sophisticated games with even more detailed and realistic graphics than have come before. While these games strive to provide the next level of immersion, they ignore the power of a more simple representation. DEFCON: Everybody Dies provides a chilling view of a modern world war through the most removed view possible in such a game.

The premise of DEFCON is simple: you\'re presented a digital representation of the world and your territory and your allies. Both sides start with the same amount of forces and resources available to them, meaning that placement of forces and platforms is key to winning the game. The game moves through several stages as time progresses, called DEFCONs. As each stage expires, the game moves on and allows players to take more and more hostile actions. From DEFCON 5, where you are allowed to place your installations, silos, fleets, etc, in range of your territory; you move up the ladder through increasingly destructive stages until you reach DEFCON 1, allowing all sides to start nuclear launches. At this point, its a war of attrition, finding yourself hoping that your AA defenses will hold out long enough for your nukes to completely level an opposing continent. After the game reaches DEFCON 1, you\'ll have a set time in which to gain as many points as possible by nuking the enemy\'s population and keeping your own citizens alive. By default, the game is weighted towards killing more than protecting, so the action gets very hot very quickly.

There\'s some simplistic RTS play in between these stages, where players pitch air forces and navies in order to weaken each others\' defenses to open up the stage for a devastating nuclear assault. There are three types of ships, each of which is vulnerable to another in a simple rock-paper-scissors mechanic. You\'ll want to make sure that you don\'t spend too much time fighting, however, since carriers and subs are better used to launch nuclear attacks at your enemy once you reach DEFCON 1. Since they can sail right up to your enemy\'s coast, they\'ll often fire your first shots against an opponent. Knowing just where and when to launch your first strike can make or break your whole game.

Where DEFCON truly succeeds is its representation and depiction of the worldwide battlefield. Everything is seen as if it was on a real-life tactical display screen, with little 2D icons representing forces and nuclear missiles blipping across the map. When a city is hit by a nuclear device, the computer coldly reports the amount of dead resulting from that strike. It really is chilling to see a city such as Berlin light up for a few seconds, with the words: "1.8 MILLION DEAD" appearing over it.

The game offers a small variety of game modes, all variations on the standard skirmish which eventually results in a world covered in nuclear fallout signs. As a small, budget indie game, DEFCON should be given a spin.