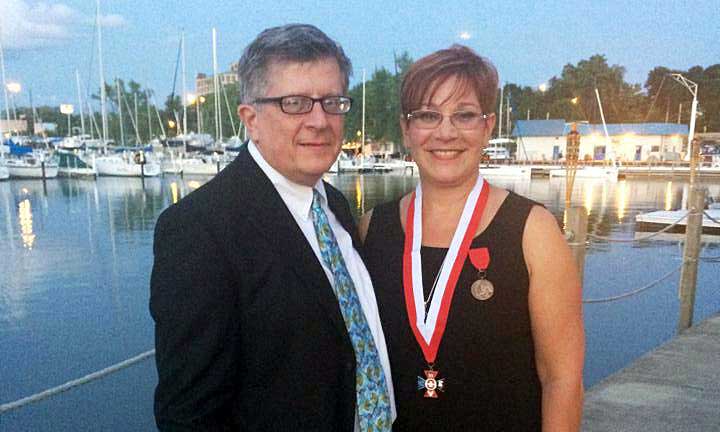 Aundrea Cika Heschmeyer, Director of PolishYoungstown, pictured here with her husband Mark Heschmeyer, in June 2014 when she was awarded the Grand Lady of Pulaski, a knighthood designation, awarded for service to the Polish American community

On October 4, 2015, Aundréa Cika Heschmeyer, Director of Polish Youngstown, Inc., will be presented the prestigious Heritage Award by the Polonia Foundation of Ohio for distinguished community service. The Liberty resident has been a vibrant member of the Polish American community for her entire lifetime. In her professional life, she currently holds the position of regional director of the Autism Society of Ohio.

Upon returning her hometown in 2005, Aundréa was the driving force behind the founding of Polish Youngstown, Inc., a non-profit organization dedicated to invigorating the Polish-American community of the Mahoning Valley.

"The Foundation was created to support the potential of young people so it only makes sense for us to recognize those community members who share that mission through action in their own communities," said Francis Rutkowski, president of the Foundation. "Aundréa, and the other awardees, reflect their pride in their Polish heritage in all of their work and make time to share this spirit through a variety of community endeavors. It is because of efforts like these that even third and fourth generation Polish-Americans can understand their families’ immigrant experience and be proud to be of their Polish extraction."

Highlights of Polish Youngstown activities include weekly Polish language classes, a monthly happy hour for adults, children’s workshops, history and cooking classes and film screenings, as well as seasonal folk art and traditions workshops. Annual Ostatki and Pączki Day celebrations have become traditions of many who are not at all Polish. Every August, the group hosts Polish-American Heritage Day, a city-wide summer festival of Polish food, music and heritage that has grown in attendance from 300 to more than 1,200 annually.

The Polonia Foundation of Ohio is headquartered in Cleveland, Ohio, but this year reached to the eastern edge of the state of Ohio to honor Aundrea because of her exceptional accomplishments in reviving the Polish heritage in this far eastern region of Ohio.

The Polonia Foundation of Ohio is a non-profit organization, incorporated under the laws of the State of Ohio to provide assistance to Americans of Polish descent in advancing their education through the form of scholarship grants. In addition to honoring Aundrea Cika Heschmeyer, the Polonia Foundation honored Allan Szuflada, National Director of Union of Poles in America, Division of PNA, Theresa Krysiak, Membership Director – PLAV Chapter 11 and National VAVS Deputy, and Raymond Vargas, Director – Polish American Cultural Center, Choreographer of Syrena Polish Folk Ensemble, Gorale and Wiwaty Polish Folk Dancers.